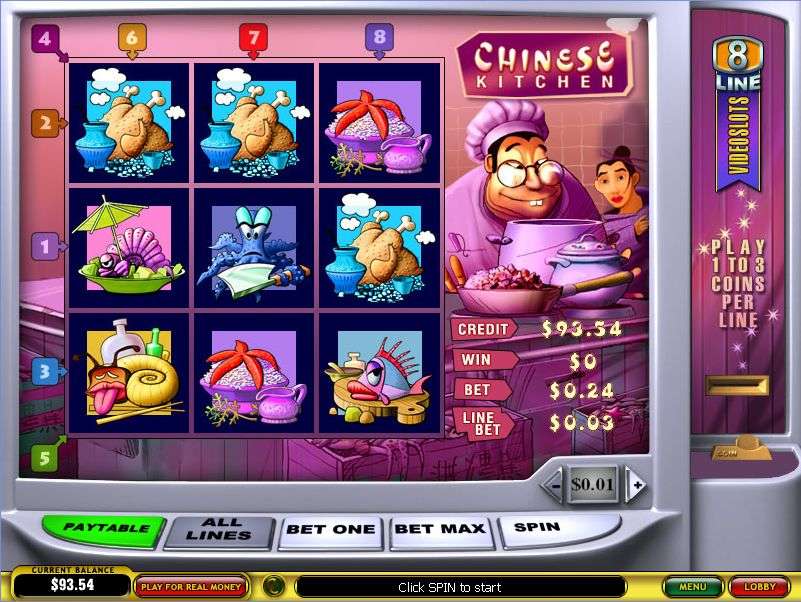 You may have heard of Chinese Kitchen. It is one of Playtech’s most unusual slot games. This title contains a 3x3 windowed lay-out, upon which sit 8 paylines. Chinese Kitchen is slightly bizarre, as the “food” that makes an appearance as icons in the game includes toads, crabs, octopus, caterpillars and turtles. Not your average Italian restaurant, then? Chinese Kitchen is comical enough, and offers an original style of online slot gameplay. The number of paylines is non-adjustable, although players can alter their coin values to be worth anything from 0.01 up to 100.00 in total. Players can stake anything from 1 to 3 coins per spin on this slot. Ultimately, Chinese Kitchen is going to cost you anything from 0.08 per spin, up to 2.400.00 per spin. Now that’s a whopping bet to make! You can win up to 1,000 coins for your troubles.

It probably won’t surprise you to learn that there are no special features included in the Chinese Kitchen slot, aside from its bizarre gaming lay-out. Symbols that do make an appearance in the slot though, include starfish, duck, octopus, frogs (incorrect, as the Chinese actually eat toads), crabs, caterpillars, fish, snails and turtles. The best paying icon in the game is the turtle, which can see players win 1,000 coins for landing 3 of them on an active payline.

Players will need to land 3 of any symbol to win a pay-out, except for crabs. The player can win 2 coins for just a single crab, 10 coins for 2 crabs, and 200 coins for 3 crabs. Crabs are somewhat rarer then, as you might imagine.

As we’ve said, there are no special features or bonus features in this slot. Instead, the player can enjoy playing on a grid, rather than on reels. The paylines are easy enough to learn. The first payline runs across the centre of the reels, whilst the second and third paylines are across the top and bottom of the reels, respectively. The fourth paylines runs from the top left to the bottom right, diagonally across the reels, The fifth payline runs from the bottom left of the first reel, to the top right of the third reel, diagonally. Paylines six, seven and eight are located on the first reel, second reel and third reel, respectively.

Despite being original and creative, the lack of special features means that Chinese Kitchen will impress some players, and not others.

Currenty there are no reviews for Chinese Kitchen Slot. Be the first one who will review it.