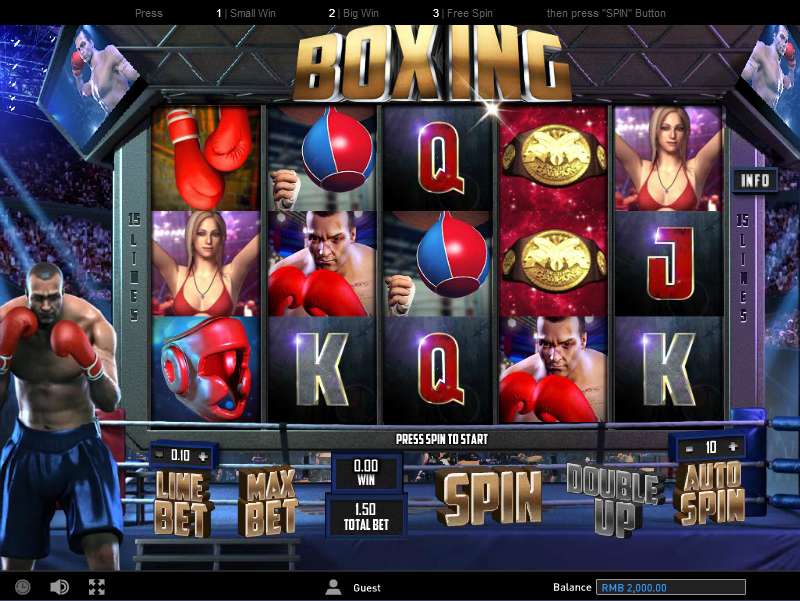 You shouldn’t need too much introduction to iSoftBet’s Boxing video slot. This slot features stunning 3D graphics, even if some of them (namely the topless lady) are a bit on the rude side, and so not appealing to everybody. Boxing features 5 reels and just 15 paylines, which isn’t as many as we would have liked to have seen in this slot machine game. Players can opt to choose coin values which range from as little as 0.10 up to 6.00 a pop, making Boxing a rather costly game to play. You cannot adjust the paylines, either. Minimum bets cost a base minimum of 1.50 per spin. Maximum bets will set you back at least 90.00 per spin.

The high playing cards make up the smaller paying symbols in this slot, with the 9s, 10s, Jacks, Queens, Kings, and Aces coughing up wins which range from 2 coins up to 150 coins in all. Players can use the boxing paraphernalia (such as punching bags, helmets, balls, and championship belts) to win anything from 15 coins up to 750 coins in all. The best paying symbol in this slot, though, is the boxer himself, whcih can see you win up to 10,000 coins in total. This is the non-progressive jackpot in this slot.

As well as dishing out the non-progressive jackpot, the boxer icon is also the wild symbol in this game. Boxer wilds can substitute and double for all wins in the slot, barring scatter icons.

Scatter icons appear as female boxers. When these symbols appear on the reels of this slot machine game, players can pocket wins which range from 5 coins up to 100 coins in total. Scatter icons are also perfectly capable of triggering a free spins bonus round when 3 or more appear anywhere on the reels from left to right.

These two special symbols are pretty bland, and do exactly what you would expect them to do. There is nothing inherently special about them, but the game would be a lot less enjoyable if they weren’t there to entertain us.

In the free spins bonus round in this slot, players will start out with a total of 15 free games. Any wins they have in this feature will be tripled, courtesy of a 3x multiplier. Additional free spins can be won during this bonus if you are able to bag more scatter icons on the reels. Just land another 3 or more scatters to exactly that. Free spins can be retriggered indefinitely in this slot.

Boxing is a decent game (graphically), but in all other departments, it is a pretty standard slot machine game.

Currenty there are no reviews for Boxing. Be the first one who will review it.