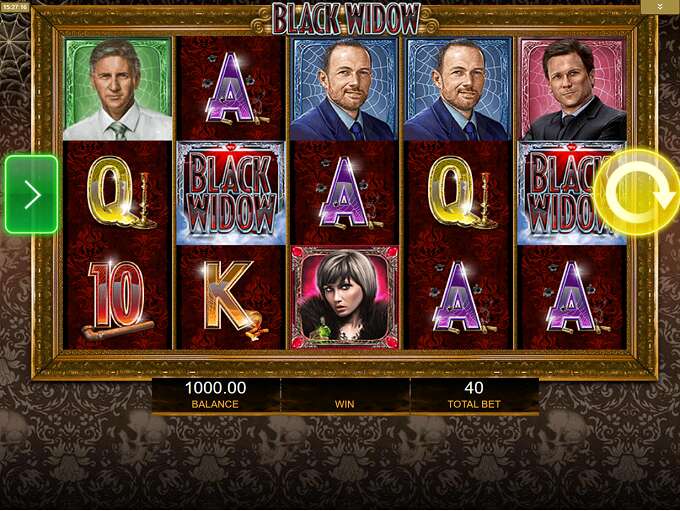 IGT’s Black Widow video slot has rapidly become one of the more popular games doing the rounds in the online casino world. Black Widow is all about a devilishly attractive women who murders her husbands to get to their money. True, it is not the most heart-warming theme ever invented for an online slot machine game, but it is one of the most original, and that too has its appeal. Black Widow is played over 5-reels, with a total of 40 payline being present for you to win upon. Up to 1,000 coins can be won in this video slot game.

None of the 40 paylines that feature in this slot can be adjusted. In that case, the only way that players are really going to be able to alter their bets is with the line bet button. Minimum bets in the Black Widow slot cost only 0.40 per spin. At its most expensive, it can set you back around about 2,000.00 coins a whack. That is a deadly wager, unless you are completely loaded.

Black Widow contains a Super Stacks feature. At the beginning of every spin, the reels will contain stacks of symbols that will transform into one of game’s icons. All stacked icons will result in larger wins for the player.

Should a player locate the Black Widow logo, they will have accumulated a wild symbol. Wilds replace all other icons in the game, with the exception of the bonus icon. They can also see you win the largest jackpot that Black Widow has to offer, if 5 are located on any active payline.

The game’s bonus symbol, can only appear on the second, third and fourth reels. Should it appear on all three of the reels at once, then the player will trigger 7 free spins. It is possible for a player to retrigger the bonus by landing additional scatters whilst the bonus round is in session.

Black Widow’s Web Capture feature is one of a kind. By capturing one of the male symbols in the central position of the third reel, the player will pocket the amount listed under each male icon. After each male has been captured, their meter rises, offering bigger cash wins per male captured. Players can win between 2x and 1,000x their total bet via this feature. Alternatively, capturing the female icon on the central position of the third reel will see players win the value of all three of the male meters.

Currenty there are no reviews for Black Widow. Be the first one who will review it.