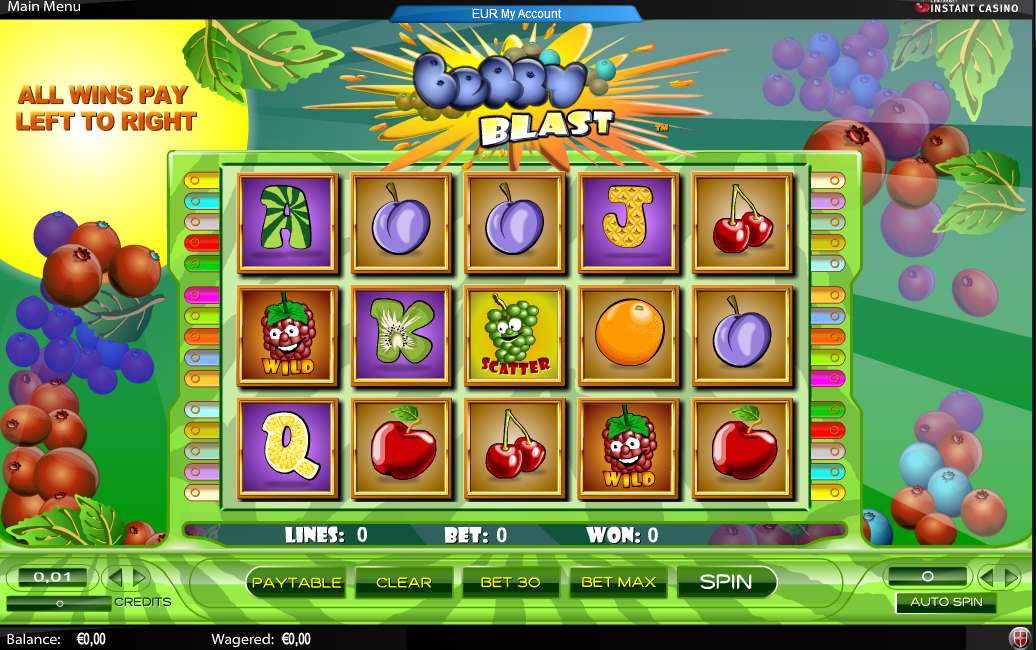 Berry Blast is a juicy Amaya Gaming production that offers five lines and thirty pay-lines filled with fresh fruity fun. Amaya is a massive player in the world of live gambling games, as well as online and mobile gaming, so, playing this video slot means playing in responsible territory. It pays a top in-game prize of a humungous 100 000 coins, when winning on the wild with the maximum wager.

Berries are believed to be very good for you when you eat them, hopefully these berries will be very good to you when you play with them too. Just think, you get to play with your food. Each fruity icon has been comically graphically crafted and animate (especially the scatters) when winning combinations are made.

There are raspberries, cherries of two different varieties, plums and oranges. Then, both a bunch of green, and red grapes are the scatters which multiply winning by wager. The bonus is triggered by a blueberry, and the strawberry triggers free spins.

Berry Blast finishes off with low paying icons – A, K, Q, and J, which are all graphically crafted to look like a watermelon skin, slice of Kiwi, orange slice and pineapple skin. The raspberry is the wild icon which substitutes for all other symbols except free spins and bonus. It is also the highest paying symbol during in-game play, where landing five on a line with a maximum bet activates the prize of 100 000 coins.

A coin bet range of 0.01 up to 0.25 may be played and pay-lines are fixed at thirty. Players may however change the amount of coins bet per line, and this runs through one to ten. A maximum wager will cost 75.00.

There are a couple of bonus games in Berry Blast, the first is the free spin feature that is triggered by the strawberry. When it appears on the first and fifth reel three free spins are given away. It also multiplies winnings by three, but this icon does not appear again in this feature, so, free spins may not be re-triggered.

The bonus symbol is a blueberry, and when it appears on reels one, two, and three (not during free spins), in the base game, the bonus feature triggers. There are ways to advance up to three levels during this feature, but unfortunately this writer was no lucky enough to land up in the game.

Currenty there are no reviews for Berry Blast. Be the first one who will review it.