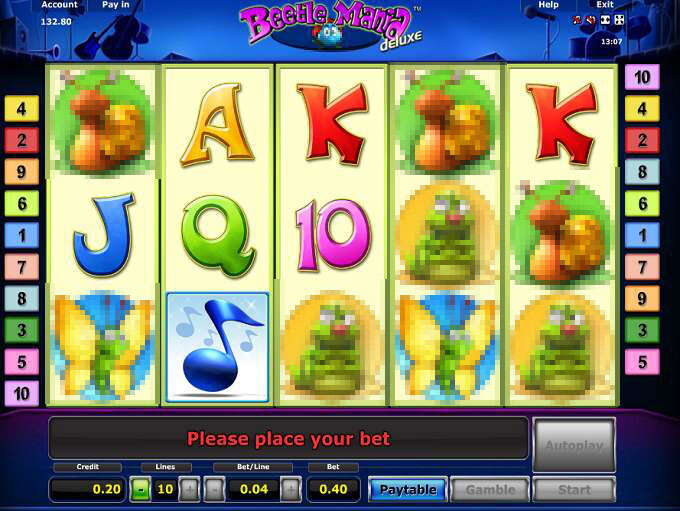 Novomatic is a relatively new gaming software designer, but as a producer of gambling games they are certainly well-respected. This company has the former F1 racing driver – NikiLauda as their spokesperson. They are also the designers of Beetle-Mania Deluxe which is a five reel, ten pay-line video slot theme on the insect world. It also offers a top base game jackpot prize of a whopping 50 000 coins for placing the maximum bet.

One might assume that as this slot is called Beetle- Mania Deluxe, there may have been an earlier version that was not quite so special Icons are colourful, they animate, are cartoonish in style, and are rendered in such a way that they might have been made out of moulding clay. The theme does appear to be a little childish for an adult game, but it is cute, as well as entertaining.

The name of the game is also a little tongue-in-cheek, playing off a pun of the pop group “The Beetles”.  Ambient sounds are typically slot-like, and not the least like the Beetles sound. Graphic quality is good.

Icons are a moth, a snail (ok…it is not only about insects), an inch-worm, and a bee which is the highest paying symbol, and is wild (perhaps it is an African killer bee?). A musical note is a scatter symbol, as are the card indices Ace, King, Queen, Jack and Ten. A ladybug triggers a two X multiplier on win.

Players are able to activate between one and ten lines by clicking the ± buttons relating to this feature on the user interface. They are also able to choose a minimum bet per line of 0.04. This amount may be increased through various levels up to a maximum amount of 10.00, therefore the top wagering price is 100.00 which is not a bad price to pay for a potential top win of 50 000 coins.

A bonus game is triggered by the scatter symbol which as we said is the musical note. When this feature is activated the backdrop of the screen changed to black, and the ladybug becomes active to multiply winnings by two. When it is involved in a winning combination, it animates into a standing insect with a Beetle-like haircut, and playing a double bass, a trumpet, or set of drums. One could imagine that there may be even more instruments it plays, and characters it animates into.

Currenty there are no reviews for Beetle Mania Deluxe. Be the first one who will review it.