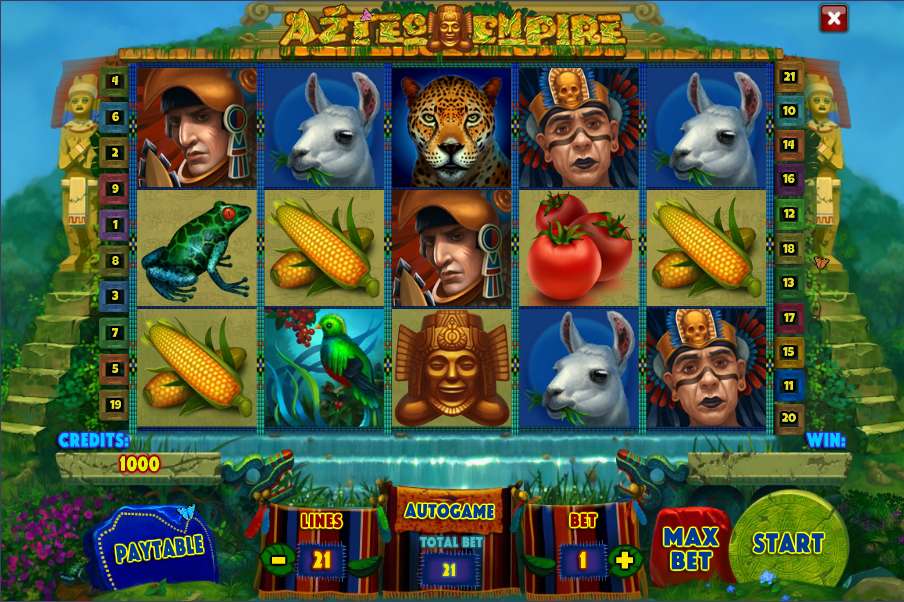 Aztec Empire is a beautifully designed video slot, fully of top quality graphics relating to the mighty Aztec Empire. The Aztec Empire was the most powerful of all the Central American kingdoms, and this slot conveys that wonderfully. This video slot is designed and developed by Playson, and is structured as a 5-reel video slot, which features 21 paylines. Players can adjust their bets per line to anything from 1 coin up to 500 coins. Ultimately, minimum and maximum wagers stem from 1 coin per line, per spin; up 10,500 coins per spin. The top jackpot that Aztec Empire has to offer is 3,000 coins.

Aztec Empire contains three special icons. The first of these is a green bird. This icon represents Aztec Empire’s scatter symbol. It can reward players with scattered wins of 2, 10 or 50 coins, when 3, 4 or 5 of them appear anywhere on the reels.

A wild symbol has also been included in this game. The mask icon is that wild. When it appears, it can replace all other icons in the game, excluding the bonus icon. Aztec Empire’s wild can only appear on the second, third and fourth reels.

Should a player locate three or more of the Aztec pyramid icons, they will trigger a bonus game. In the bonus game, the player is met with a number of blocks. Each block contains either a pyramid, or a cash multiplier prize. The first pyramid is randomly selected. The player then has three attempts to increase their multiplier, or land the Diamond pyramid to trigger the Super Game. Wood, Stone, Bronze, Silver and Gold pyramids reward players with 10x, 12x, 15x, 20x or 25x multipliers, respectively. Ideally, you will want to find the Diamond pyramid on your final guess, this way you can accumulate big wins before you trigger the Super Game bonus.

If the Diamond pyramid is located, the Super Game is triggered. There are five rows of masks in this bonus. The player can select one icon on each row. After each row, the player will either win a prize (a multiplier against your total bet), encounter a blank square (which moves them onto the next row), or a cobra. If they find the cobra icon, then the Super Game is completed and the player returns to the base game.

Currenty there are no reviews for Aztec Empire. Be the first one who will review it.