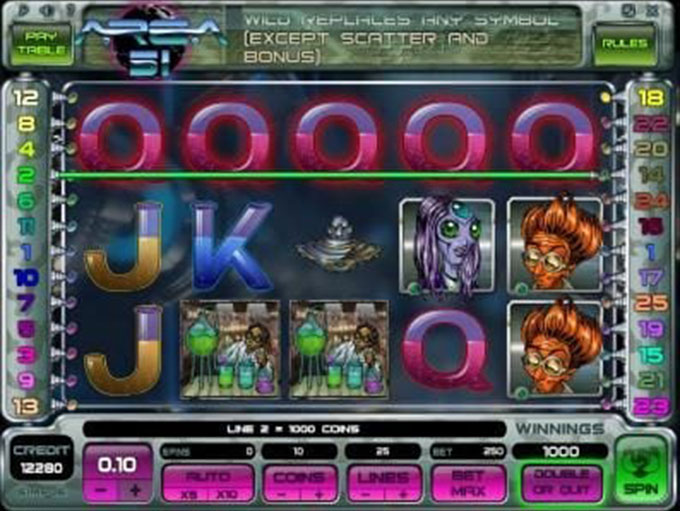 Area 51 is the US Air Force facility alleged to be hiding the secrets of UFO crash landing such as the Roswell incident. This slot game is based on the same theme, and comes to us shrouded in just as much intrigue from iSoftBet Gaming. It is a five reel, twenty-five pay-line, none progressive video slot, with a maximum in game jackpot prize of 10 000 credits and much more in the bonus games. This is a fabulous slots for fans of UFO theory, and worth a spin for any player with an interest in the theme.

The Aliens in Area 51 are quite frankly some strange looking creatures, obviously iSoftBet artists were given free rein to express themselves. Symbols are the gates to Area 51, complete with warning signs; a scientist presiding over test tubes, and four different alien creatures, although we doubt they would be terribly alien if they were living on their own planet. Graphics are good - imaginative, some icons animate, but sounds are a little bit lacking in creativity.

Balance of icons is made up of Ace, King, Queen and Jack symbols graphically crafted to look like test tubes containing colourful liquid. The wild is a laboratory beaker half filled with liquid in which a purple blob floats. The scatter is the danger sign for area 51. Some of the icons animate when creating winning combinations. For example the gates of Area 51 open up, and a vehicle drives in, and the scientists’ beakers wobble over while noxious green gas pours out of them.

Reels have been set into a retro laboratory backdrop, with a user interface which offers players the opportunity to change the number of lines in play, auto spin, coin size, coins per line, gamble (double or quits for winning), and spin. Between one and ten coins per line may be played which the coin bet range starts at 0.01, increasing up through to 0.10. The top wager is 250 credits.

Despite numerous attempts to access the bonus feature, this was not to be for this reviewer. This game is triggered by the flying saucer icon, and three, four or five of these symbols trigger the game. There is up to 50 000 credits available as a prize, and the mission is to test the life on Earth.  Other than that we can’t really tell you all that much more regarding the bonus game.

Currenty there are no reviews for Area 51. Be the first one who will review it.