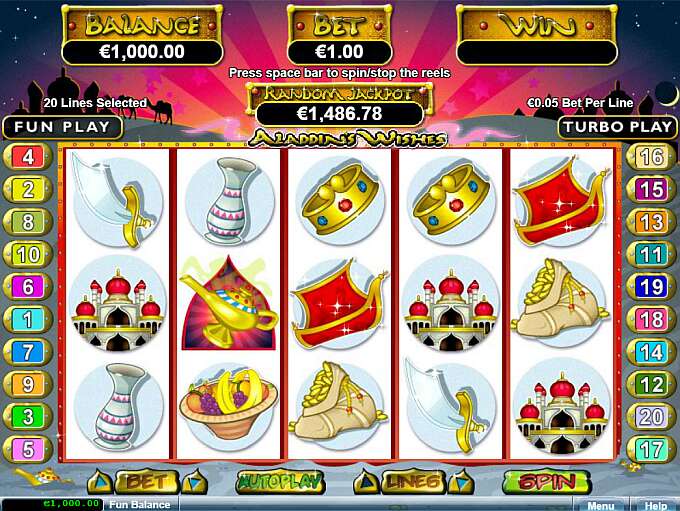 The familiar mystical story of Aladdin, his Magic lamp and his three Wishes are brought back in this slot from Real Time Gaming. In addition to the always appealing story line, they have also added most everything a slot player wants. There are bonus games, multipliers and even the potential for a huge payoff with a progressive jackpot.

Aladdin's Wishes has 5 reels and 20 pay lines. Whether you like to play for small or big amounts, this game is set up for you. You can bet as little as 0.01 on each spin, or as much as 100.00. While there is no telling how much the progressive jackpot might pay, the maximum payout in the regular part of the game is 5,000 coins.

There are a large number of symbols used in Aladdin's Wishes and naturally they reflect the exotic theme of the game. There is a bowl of Fruit, a Vase, a Sword, a Magic Carpet, a Palace and an Abu. There are also the live characters, including the green Genie as well as the lovely Princess Jasmine. Her crown is another of the game's icons. Princess Jasmine is by far the best paying symbol in the game. You will get back 5,000 coins if you can get five of her symbols on a pay line.

The Wild symbol in the game is Aladdin himself. He will double any winning line that he appears on. The Aladdin symbol is a little hard to find, since he only appears on the middle three reels.

The Scatter symbol in Aladdin's Wishes is the Magic Lamp. If you get at least three of them on an active pay line, you will enter the Bonus Feature.

In the bonus game, you will choose among five Magic Lamps which contain prizes. The number of choices you have depends on the number of Magic Lamps you had on your triggering spin. Each Lamp contains a prize, including one which offers 25 free spins. The other Lamps contain multipliers which will increase the size of the payoff of your triggering bet.

Currenty there are no reviews for Aladdin's Wishes. Be the first one who will review it.