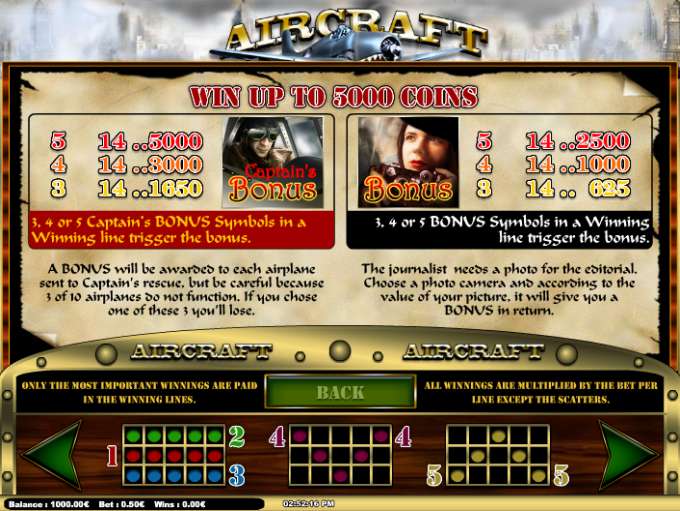 Aircraft is an exciting game which captures the spirit of the daredevils from a previous era. The animation in this game from Isoftbet is excellent, as is the sound quality. You might feel as if you are part of the action even if you're playing it from the comfort of your chair.

The game board of Aircraft is set up carefully to resemble the view that a pilot might have had when he looked at his plane's dashboard. The information telling you how much you bet and how many lines are active looks like the dials that told the pilot how much altitude he had or how much fuel was remaining.

Everything is designed to make you feel like you are in a fighter pilot cockpit. These include the symbols that are used in Aircraft. They include a Pilot, an enemy Captain and a smoking Jet about to crash.

The Wild symbol in the game is a fierce looking fighting Craft. Get five of them on a line and you will collect the game's jackpot of 8000x your bet. There is also a Scatter symbol which triggers a bonus. This symbol is a picture of an old newspaper telling the story of past aviation heroism. Land five Scatter symbols anywhere on the board and you will collect 200x your bet.

There are two bonus symbols in the game. One of them is a Captain and the other is a female Journalist. You need to get at least three of the symbols to launch the bonus game. If you get four or five, the prizes you could win will be bigger.

For the Journalist’s Bonus game, you will choose among seven different cameras. Most of them contain prizes, but one does not and will end the game. Before that happens, you can win as much as 2,500 coins.

For the Captain's Bonus game, you will get to choose among seven different aircraft. All but one of them contains a prize. You will win whatever the prize is listed on the plane, but if you pick the wrong plane-the one that is out of fuel-the game is over. You can win as much as 5,000 coins in this bonus round.

Currenty there are no reviews for Aircraft. Be the first one who will review it.