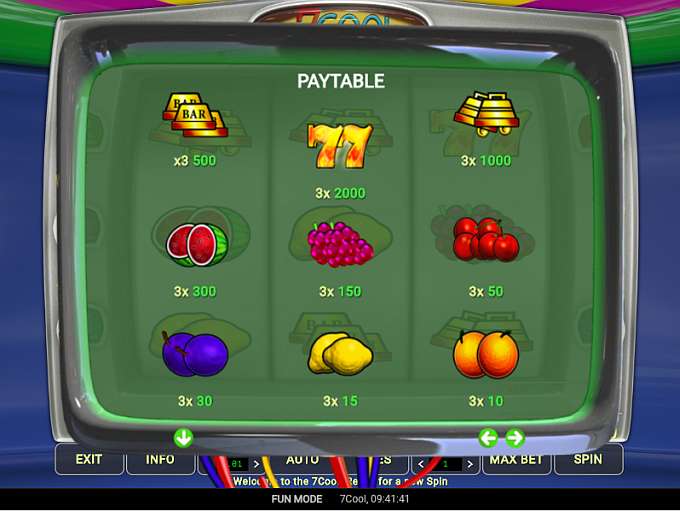 We have come to realize that 7 Cool is a very simple, and the easy-to-play game developed by Bomba Games. This game has an old-fashioned style with its 3 x 5 grid, and its simplistic icons of Gold bars, number sevens, and fruits. To win a prize, the bidder only needs to get matching icons in the same line, across a pay line.

Unfortunately, this game does not offer any bolus icons or features, which makes us reminisce about the old days of classic fruit slot machines.

While reminiscing on old times, this game begins when the bidder presses the spin button, instead of pulling a lever. Behind the reels, the bidder can see a blue background with an insinuation of purple, yellow & green. Having 9 classic icons at all times on the grid, placed in three rows and three reels, this game evokes old times, when playing bidding games was simple and enjoyable.

The bidder can find the typical fruit icons: lemons, oranges, cherries, and plums as the lower icons. And grapes and watermelons are more valuable ones.

The ones that may bring the bidder a bigger reward are the bar icon and the bells (you can have a rewarding combo by getting three equal symbols). And the icon that pays the highest is de 77.

Usually, here we would give you a tour of the bonus features that the game possesses, but unfortunately, this game does not have any scatters, free games, wild icons, or anything of the sort.  This game focuses only on the unpretentious pleasures of spinning the reels and, getting some prize if you are lucky when the icons match across the lines.

The symbol that pays the lowest is the orange, for which the bidder can claim ten times the line bet when it appears on a pay line. The highest valued piece of fruit is the watermelon, which awards three hundred times.

Currenty there are no reviews for 7 Cool. Be the first one who will review it.