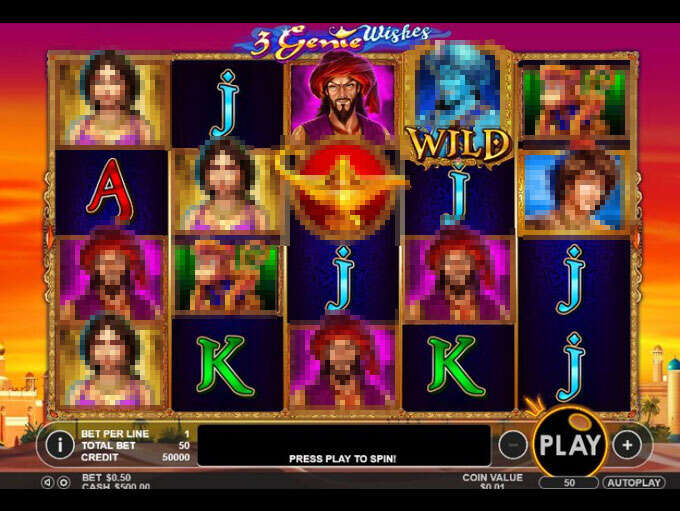 New Customer Offer. T&C’s Apply. 18+. 50 Free Spins. Valid on slots by NetEnt only. You have 7 days to use free spins, otherwise the free spins will expire. Valid unti: 31st of December 2021.

3 Genie Wishes is a Pragmatic Play video slot, and one which is based on the Arabian Nights tale. This theme is often repeated in the online casino world, so 3 Genie Wishes is going to have to do something rather spectacular if it is going to outdo the many other slots with this theme. The imagery is very much in time with the theme of the game, and the wagering range is decent, too. Players can bet on 50 paylines (although they won’t be able to alter those lines), and they can choose coin values which stem from 0.01 up to 0.50 in total. Players will find that they can wager up to 10 coins per line, giving the 3 Genie Wishes slot a floor bet of 0.50 per spin, and a ceiling bet which is fixed at 250.00 per spin.

The blue genie acts as a wild symbol in this slot, and it can substitute for all other symbols in the slot, except for the scatter. This icon also doubles as the best paying symbol in the game, with prizes worth 400 coins in all. The genie wild is also stacked on the reels during the base game.

Scatters take the shape of a golden lamp. This magic lamp can appear on the first, third and fifth reels during the base game. When 3 scatter icons appear, players will win back their total bet. They will also trigger a bonus feature in this game with the same number of scatters.

The bonus feature in this slot is a free spins game. When the bonus begins, players will be able to choose one of three items which appear on the screen. One out of 4 possible prizes will be paid out to the player. These prizes can include raining wilds or sticky wilds for use in the free spins bonus, and two cash prizes – one decent (between 10x and 500x your total bet), one miniscule, at just 1x your total bet.
Most notably, the genie wild is absent from the reels of the slot during the game’s free spins feature. The two wilds you can win, though, include Raining Wilds (10 free spins with random wilds), or Sticky Wilds (6 free spins with wilds which remain locked into place for the duration of the bonus round).

3 Genie Wishes isn’t a bad slot at all. It is one of the better Arabian Nights themed slots to be released by any developer, which is a pleasant surprise from Pragmatic Play.

Currenty there are no reviews for 3 Genie Wishes. Be the first one who will review it.