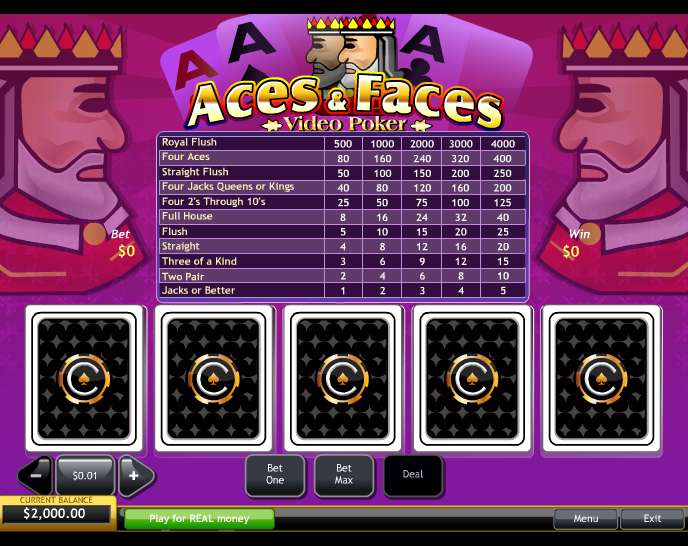 About Aces And Faces

The Playtech version of Aces and Faces is a rather austere and serious game, at least in appearance. The “faces” are staring at each other from the two sides of the game board. Below them are the five cards of the hand. Between them is the pay table. There isn't too much more to this game, but that's all right if you get a winning hand, especially one with a lot of Aces or Faces.

Playtech Aces And Faces is quite simple to play, with few features and not many buttons to click. You can choose to increase or lower your bet. You can also choose to BET ONE COIN or BET MAX. The only other button is DEAL. Any other choices you have will pop up after the hand is over.

The rules of the game are the same as in most other versions of video poker, though there is a difference in Aces And Faces payoffs. The emphasis is on four-of-a-kind, especially four Aces. That hand pays 400 coins if you bet the maximum. That's more than a Straight Flush, which pays 250 coins. You'll also get more for four Jacks, Queens or Kings, which pay a maximum of 200 coins. All other four-of-a-kind winners pay 125 coins on a max bet.

If you've gotten used to playing multi-hand video poker, the pace of play with just one line may seem slow. You might also find you'll need a different kind of strategy without having multiple chances to win. When you're playing four or more hands on each deal, you know that you can take a chance with a possible flush or straight. There is a good chance it will come through in one or more of your hands and more than pay off for the other losing hands. You can't be so sure when you're playing just one line.

There is a Gamble Game in Playtech's Aces And Faces which will be offered after every winning hand. You can choose to gamble all your winnings or just half  of them. If you win, you'll get the same options again. If you lose, you can just push the DEAL button and bring on another hand.

Currenty there are no reviews for Aces & Faces. Be the first one who will review it.