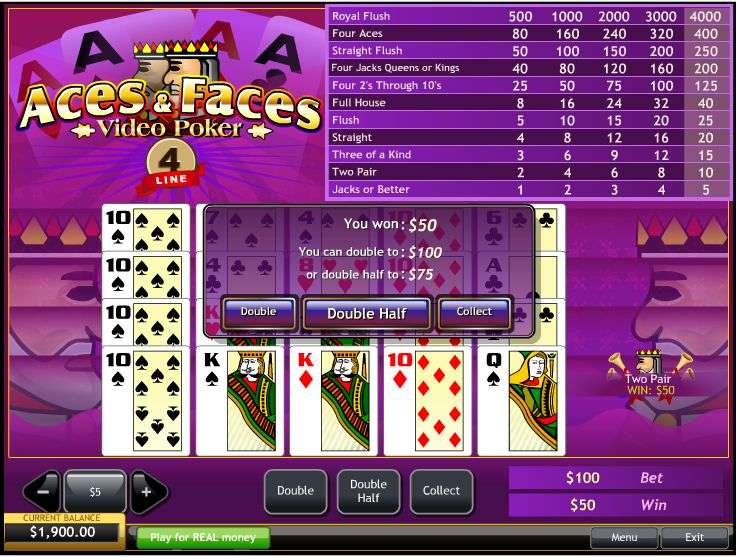 About 4 Line Aces and Faces

Don't be fooled by the title of this game, You aren't playing four different hands of video poker at one time, you're playing one hand four times.

You are dealt one five-card hand in the conventional video poker way. As usual, you get to decide whether to keep or discard each of the five cards. What makes this game different is that there are four lines, so when you choose the cards you do not want to hold, you'll be dealt new cards on every line. Each one of the four hands uses a separate deck, so there are four different and random outcomes for each line.

The game is similar to another Playtech Software video poker game, “25 Line Aces and Faces.”  As the title of that version indicates, you have many more lines in play in each hand, with one base hand also setting up all the others. With 25 lines, however, you could end up betting a lot of coins and losing a good deal of money very quickly. There is not nearly as much risk of that in the 4 Line version.

You might also prefer this game because the board is much less cluttered. With 25 lines, the action is also very quick and you might have trouble following all the results. That is not a problem with 4 Line Aces And Faces.

The four hands in the game are stacked on top of each other on your video screen, with the main hand closest to the bottom. Once you choose which cards you will hold, they are put in place on all the lines. Then the cards are dealt and each hand is completed one at a time.

The rules of the game are otherwise the same as a conventional Jacks or Better game, which means that you need at least a pair of Jacks to collect. With four opportunities for your choice of cards to succeed, you might try to play a little more daring than you would with one line, but there is no great advantage in altering your basic strategy.

The only unusual or special feature of this game is it's four-line format. The payoffs are similar to what you would find on a conventional single-line video poker machine. The maximum payoff is naturally for a Royal Flush hit with the maximum number of coins. It pays off at 4,000-1.

There is a chance to double-up after every wining hand. If you choose to try it, you'll have the option to gamble all your winnings from the last hand or just half of them.

Currenty there are no reviews for 4 Line Aces and Faces. Be the first one who will review it.