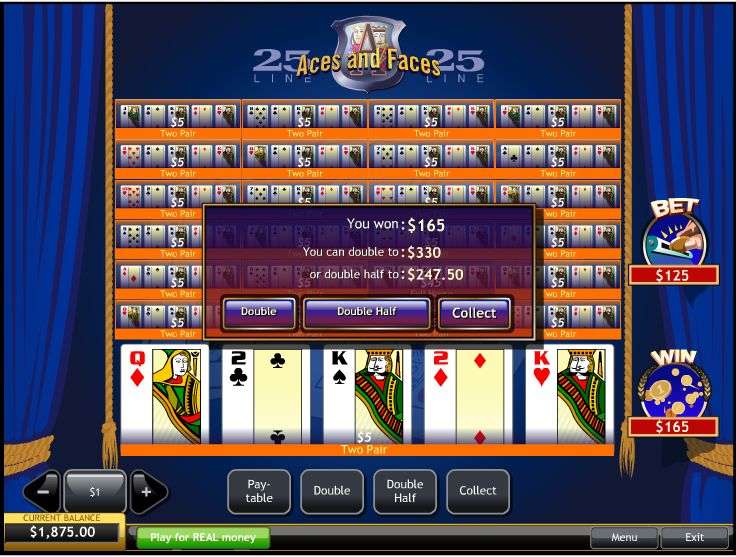 About 25 Line Aces And Faces

The title of this Playtech Software game lets you know that you are playing a version of video poker that you've probably never seen before. There are 25 different hands on the screen and they are all yours.

It would be too time consuming to make decisions for 25 hands, but in this game, you don't have to. You only have to decide what to do with one hand. The screen will then play out that decision 25 times using 25 different decks.

The game is otherwise played in the conventional video poker manner. “Aces and Faces” is just a fancier term for the “Jacks or Better” version of the game.

Near the bottom of the screen, you will see the five cards to be used in each hand. Above these cards sit the other 24 lines of cards. There are four columns with six lines each.

After you've made your wagers and are dealt your hand, you then decide if you want to hold any of your five cards. All cards you hold are also put in place on the other 24 lines. The cards you discarded are then replaced on the main line, but also on the other 24 lines. The hands are completed one at a time, from the bottom of the columns to the top, with a bell going off every time a hand wins. .

With 25 lines on the screen, you'll want to play this version differently than you would play a conventional one-line video poker game. In particular, if you need just one card for a flush, you should always try for it, since, with 25 lines, the odds are in your favour to collect several times.

Except for the possibility of a flush, you should not throw away any other hand that is already a winner. You're guaranteed 25 payoffs for yourself and the amount of that payoff will only be increased when you draw more cards.

There is a double-up opportunity after every hand (technically after every winning hand, but it's highly likely at least one of your 25 hands was a winner.) If you accept the offer, you are then given a card to beat and a choice of four cards to try to beat it.

A special feature of 25 Line Ace and Faces is that you don't have to risk all your winnings in the double-up game. If you choose, you could bet only half of the money you've collected.

The double-up game ends either when you're beaten or when you click “Collect.”

It's very interesting! I can recommend this game

so much fun. everything about the games is fun

have a good time