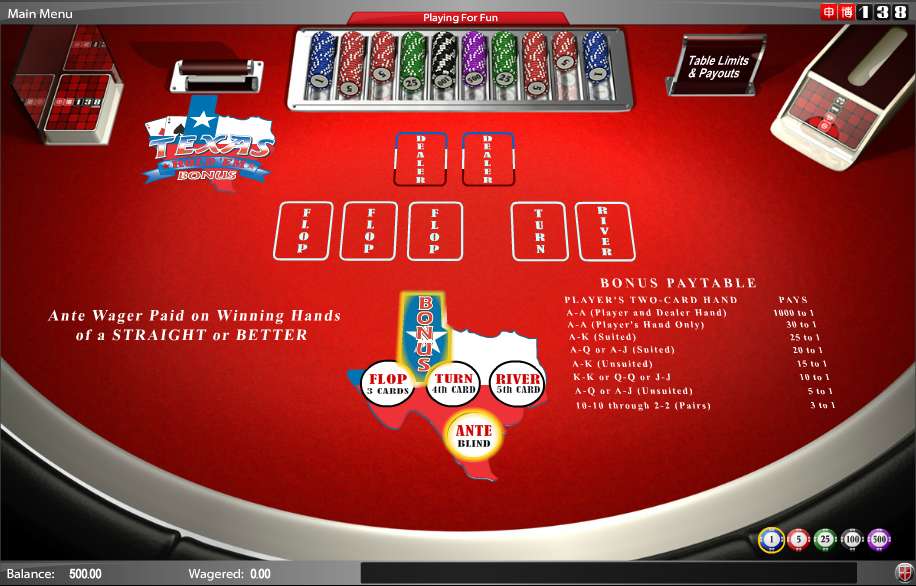 This casino variation offers more strategic decisions than most poker-based games which match the player vs. the dealer. The game resembles a regular Texas Hold 'em hand, except that you're not playing any opponent except the dealer. You will get two cards to start and eventually there will be five community cards dealt if the hand lasts that long.

You begin the game by making an Ante bet. Before the cards are dealt, you also have the option of making the “Bonus” bet which is separate from the Ante and offers the possibility of a big payoff. The Bonus bet can still win even if your regular ante bet loses.

After the initial betting, the player is dealt two cards while the dealer also gets two cards, though his are face down. At this point, the play can fold his hand and lose his ante bet. If he chooses to continue, he has to make what is called a “Flop” bet, which has to be twice the size of the Ante.

The Bonus bet offers the possibility of a real jackpot. If you get two Aces and the dealer is also dealt two Aces, then your bonus bet will pay off at 1,00-1 odds.

You need at least a pair to collect on your Bonus bet and you can also win if you get an Ace with any face card.

i"m winning so right now i love this game.