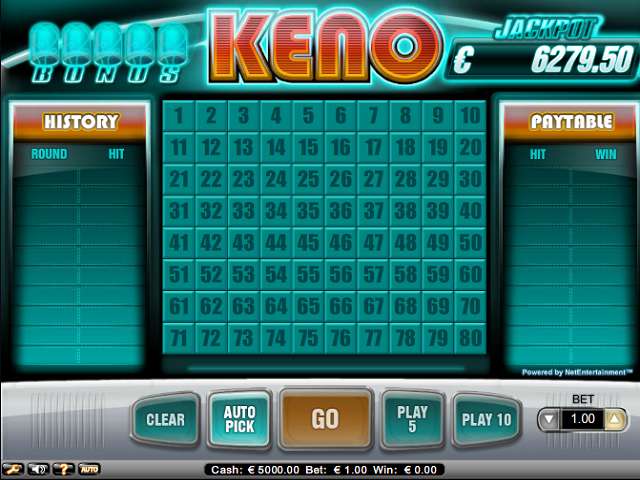 This game of Keno comes from the Ne Entertainment portfolio of games. It is a very good example of this game which is believed to have been first played in China. It is a very simple random number game that looks much like a bingo card, and plays pretty much the same way, only 80 numbers are used. It also offers a progressive jackpot prize, and in game prize of 10 000 coins.

It is said the game of Keno funded the building of the Great Wall of China. As has often happened in history, lottery games have been started to fund wars, and all kinds of government expenses. These games are cheap to play do, anyone can afford to take a risk with the chance of winning a very large prize. This game of Bonus Keno from Net Entertainment is based on the very same rules as were first used way back in the Qin Dynasty, which was somewhere around 208 B.C.

Twenty numbers are randomly drawn by the game, and ten numbers are marked on the card. When numbers match, players win. They need to match at least two for a win, and the more numbers that match, the higher the prize according to the pay-table. A game history is available on the left of the screen, so that players can formulate how well they are winning or losing.

As this is a game with the word “Bonus” in its name, it features a bonus game which is highly unusual. The words Bonus are spelled out at the top, and each time a Joker pops out of the game, it settles under one of the letters. Once five bonus Jokers have been collected for each corresponding letter, this game is triggered. It is a free round during which wins are paid double unless the Jackpot prize is triggered. As we mentioned earlier, the current jackpot is €5000, and this is displayed at the top right of the screen. This progressive prize is also regularly updated, and is apart from the top in game prize of 10 000 coins.

so far so good