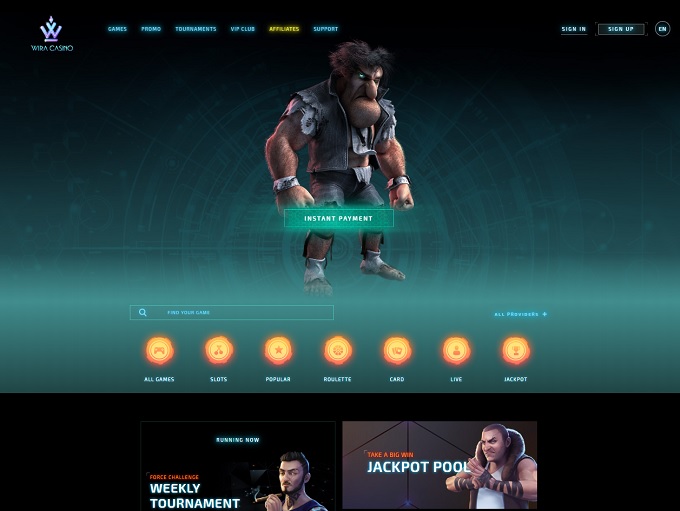 This mobile casino site only made its debut in 2018 and is yet to attract a large enough crowd to be a significant player in the online casino world. Playable in English, Spanish, Portuguese, Russian, Turkish and German, the site aims to appeal to a European audience. Wira Casino is a Curacao licensed casino, and one which is owned and operated (like so many other sites) by Direx N.V.

Payment methods are a touch on the limited side over at Wira Casino. Players can choose to deposit using VISA, MasterCard, Maestro, Zimpler, Paysafecard, Neteller, Skrill, Cubits, Yandex and Qiwi. If they have any questions or queries, players at this Cyprus based site can get in touch via e-form or seek out answers via their petite and compact FAQ (frequently asked questions) guide.

Alongside the welcome bonus deals, Wira Casino also offers players a birthday bonus, and there is a separate high-roller bonus offer which is worth a 50% match and is valid up to €1,000 in all. The promo bonus code of WIRACASINOHR is needed to claim that offer. Sunday reload bonuses, and plenty of tournaments can also be found at Wira Casino.

Wira Casino features games from the likes of bGaming, Microgaming, Net Entertainment and BetSoft Gaming. These software providers dish out an array of slots, popular games, roulette, card games, live dealer casino games and jackpot casino games at the site. Keep an eye out for some of the games appearing in weekly tournaments at the casino, too, where they often form a part of impressive prize pool competitions.

Notable games which you may wish to have a pop at include 108 Heroes, Aloha: Cluster Pays, Ariana, Beautiful Bones, Blood Suckers, Bridesmaids, Deco Diamond, Dracula, Dragonz, Emoji Planet, Evolution, Finn and the Swirly Spin, Flowers, Football Star and many more, including top titles such as Starburst, Gonzo’s Quest, Immortal Romance and Thunderstruck II, too..

I have waited 3 hours for chat. Sended few emails etc. They never contact or answer in chat. Its been 24 hours, they don't process documents or withdrawals, so this casino is a huge scam. Do not ever deposit here! It seem's they do take money in, but completely vanishes after that. This is not real casino even though it's runned by Direx nv. Really odd.