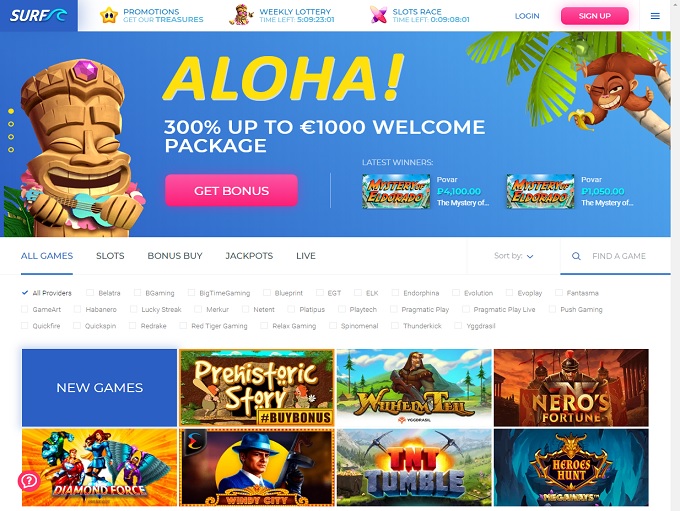 Surf Casino has a few years’ worth of experience under its belt now, having launched in 2017. The online casino has become a favourite of players who favour the big titles, with leading games from top developers found at the site. Licensed out of Curacao and operated by Direx N.V. Surf Casino may be a small casino, but it is a rapidly growing one.

The online casino provides both e-mail and live chat support to its members. The site is also known for hosting a decent array of payment methods for depositing players to use. Such options include Neteller, Skrill, MasterCard, VISA, Paysafecard, Maestro, Zimpler, Qiwi, WebMoney and a handful of other options, such as NeoSurf.

By joining the online casino as a new player, Surf Casino members can claim a 100% match deposit bonus on a first deposit. This offer is worth up to €100 in total and requires at least €10 to be deposited into an account to claim the deal. On top of that, there are 50x wagering requirements in place, which may be just a touch on the high side for some players.

Other promos and bonus deals aren’t as commonly offered at Surf Casino, and you might find at rival sites. However, there are certainly deals up for grabs if you visit the promotions page. These include primitive loyalty deals, as well as the usual array of deposit/free spin offers for long-term members of the online casino site.

One thing which Surf Casino does extremely well is provide players with a wealth of games from a variety of top providers- Most of the best in the business offer casino titles to players via this domain. Notable providers include Net Entertainment, Big Time Gaming, Microgaming (and their Quickfire platform), BetSoft Gaming, Play ‘n Go, Evolution Gaming, Quickspin, Pragmatic Play, Thunderkick, Yggdrasil Gaming, ELK Studios, iSoftBet, Endorphina, Blueprint Gaming, Spinomenal, Amatic Industries, EGT, Habanero and others.

Playable casino games include online slots (of course), but also roulette, bingo, baccarat, craps, keno, video poker, table poker and a handful of other table games, such as blackjack and roulette. Top titles such as Gemmed, Yak Yeti and Roll, Sahara Nights and Chili Quest represent some of the more popular, modern released at the casino. However, firm favourites such as Fruitoids, Archangels: Salvation, Legacy of Egypt and Aloha: Cluster Pays are also top titles you can play.