Spin Casino has a warning, we advise you play at another casino. 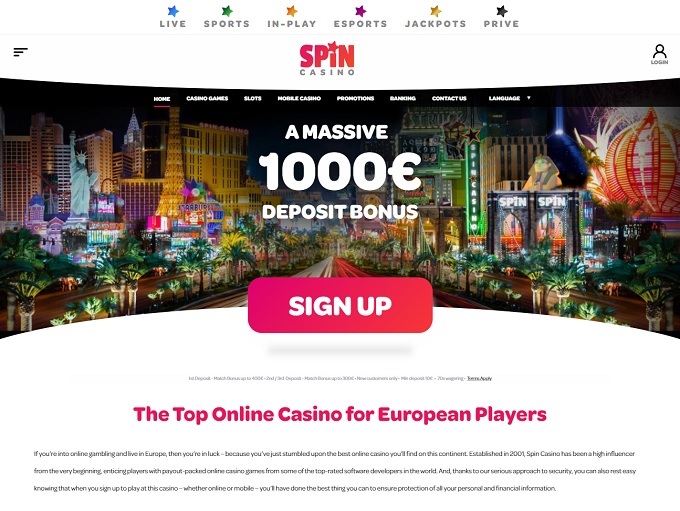 Spin Casino advertises itself as a site which can offer “world-class” gaming. On the face of it, they bear an eCOGRA certification and are licensed by the UK Gambling Commission, so one would certainly hope so. While everything looks okay for the most part, this site has had a colourful past, and not in a good way.

Player payments have been an issue for Spin Casino. They were found to have unfriendly terms and conditions regarding bonuses, and they took quite a while to pay players, on occasion even refusing withdrawals. This seems to have been rectified. However, it is worth bearing in mind. Customer support seems to be fairly decent, with good response times recorded via telephone, e-mail and live chat.

The only casino currently offers players a welcome bonus which is worth up to €1,000. It spans the first three deposits that they make. The first, second and third deposits made by players are worth up to £400, £300 and a final £300, respectively. However, given their troubled past, players should read the terms and conditions of any bonus they plan on claiming at this site very carefully.

This piece of advice doesn’t just apply to the welcome bonus, but any offer currently carried by Spin Casino. There are loyalty bonus offers for instance, which seem very generous at first, but which may have wagering requirements and stipulations which players may not agree with. While Spin Casino has cleaned up their act over the last few years, old habits die hard. Again, always do your homework first.

Only 450 games seem to be offered at Spin Casino, which is quite a small amount when compared to other leading UK casino sites. Those games cover almost all of your major gambling genres, including table games such as baccarat, blackjack, roulette and poker, as well as slots, video poker, instant win games, and more. Live casino games are also provided. These games are developed by Microgaming for the most part.

Some of the more recognisable games a player can hope to play at Spin Casino are slots. Major Microgaming titles such as Thunderstruck II, Immortal Romance, Lost Vegas, Jurassic Park and Jurassic World, Terminator 2, Avalon and it’s sequel, Avalon II: The Quest for the Grail, Halloweenies and So Much Sushi are worth a look if you have decided to play at Spin Casino anyway.

Currenty there are no reviews for Spin Casino. Be the first one who will review it.