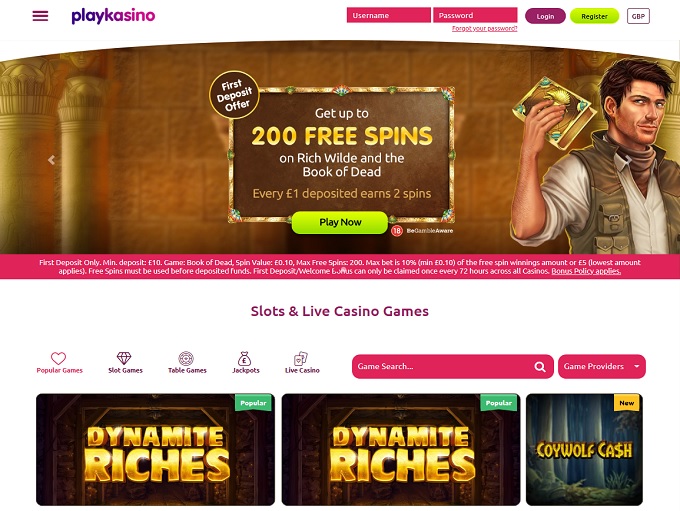 Play Kasino is an internet betting site which is ideally suited to players based in Northern Europe, in particular, Scandinavia. Players can opt to play in English, German, Finnish or Norwegian at Play Kasino, which launched in 2019 and is a UK, Malta and Danish licensed domain. Owned by Play Gamified Ltd, this site also accepts players from outside Europe and is mobile-friendly.

A sizeable array of deposit methods can be used to top-up a balance at Play Kasino. Players can opt to deposit using Skrill, Neteller, Paysafecard, EcoPayz, VISA, MasterCard, Trustly, WebMoney, PayPal, Maestro, Zimpler, Boku and a handful of other options. Around the clock support is offered at Play Kasino, with e-mail, live chat and FAQ options available for all registered members of Play Kasino.

If you register as a new member of Play Kasino, you’ll be invited to claim the casino’s opening offer. This consists of a 100% match which can double a first deposit at Play Kasino by up to €50. The site also provides 50 free spins on Play ‘n Go’s Rich Wilde and the Book of Dead slot. Between these two treats, players can start out at Play Kasino in style.

A serious of other promotions can also be snapped up by members of the internet betting site. There are tournaments, daily promotions, free spin deals and special one-off deals which could see players snap up free spins for a year. A VIP club is also supported, where players can bag free cash and spins, and other benefits from a loyalty bonus program.

Currenty there are no reviews for PlayKasino. Be the first one who will review it.

PlayKasino Casino supports banking methods for deposits and withdrawals for