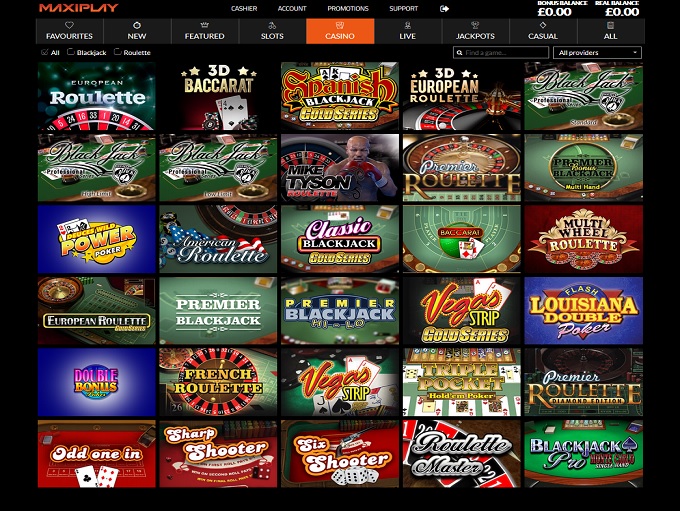 This site certainly has a cosmopolitan look on its home page, with an overhead view of an exciting city, presumably Las Vegas. But this casino has more to offer than just glamourous images. “Our goal,” MaxiPlay says, “is to achieve the highest level of member satisfaction by providing excellent and professional services.” You can play in this casino using your computer, tablet or smartphone.

MaxiPlay is a new online gaming site that is licensed in Malta. The only language supported is English and the only currencies accepted are from English-speaking countries. You can use British pounds as well as the dollars of Canada, New Zealand, Australia and the United States.

MaxiPlay has a healthy Welcome bonus for anyone just joining the site. They will give you a 200% bonus on your first deposit that can be worth as much as 200.00.

The casino provides more than a dozen ways to put money into your account.  They include the credit cards Visa and Master Card as well as the web wallets Skrill and Neteller. You can also use Sofort, Maestro, Paysafecard and iDeal. Members who reside in the UK can also use Pay by Phone.

As you play in the MaxiPlay Casino, you will accumulate Loyalty points that will benefit you in the VIP Room. All new members enter the program at the Bronze level. As your points add up, you will move to the higher levels, which are Silver, Gold, Platinum and the top level, Diamond. Reach the highest tier and you will get personalised gifts, an anniversary bonus and birthday presents, among other rewards.

If you need to contact the casino, MaxiPlay can be reached with either an email or a Live Chat. Customer support is available from 6:00am until 23:00 GMT.

You’ll find more than 100 games at this site, which utilizes the software of several leading providers. They include Microgaming, 1X2Gaming and Thunderkick. That company has provided the casino with their popular slot, Esquelito Explosivo.

MaxiPlay also has video poker, keno, scratch cards and such popular table game as blackjack and roulette. You can also choose from several video poker games, including Deuces Wild and an interesting new variation, Aces and Eights.

Among the dozens and dozens of slots you can play at MaxiPlay are several with progressive jackpots. They include the Microgaming creations Mega Moolah, King Cashalot and the three-reel game, Tunzamunni.

Currenty there are no reviews for Maxiplay Casino. Be the first one who will review it.