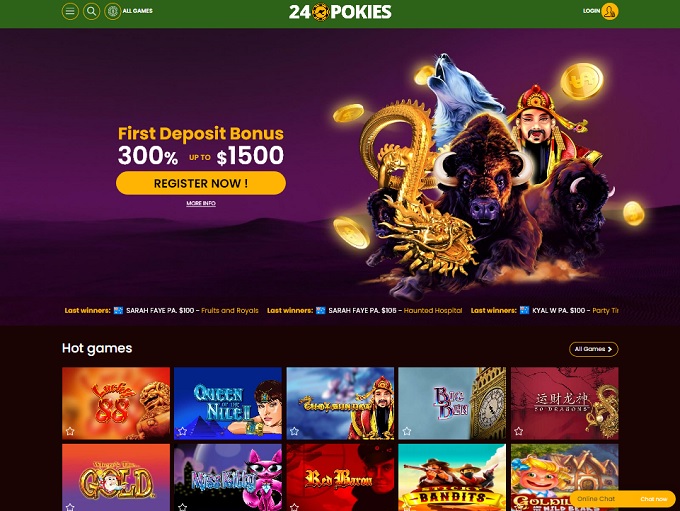 24 Pokies Casino launched just this year, but already this online casino has opened itself up to a fair degree of scrutiny. It has been blacklisted in some quarters, namely due to its licensing and authenticity when it comes to payments. 24 Pokies is predominantly an Australian online casino site and one which is reportedly licensed out of Curacao. Despite that, very little information is available on the license this casino purports to have.

The English language casino site accepts payments made via VISA, MasterCard, PayPal, Skrill, Maestro, VISA Electron, Ukash, Neteller, bitcoin, ECO, Click2 Pay, Paysafecard, instant banking and ClickandBuy. As you can plainly see from their website, customer support is sketchy at best, being provided by e-mail only. This just doesn’t suffice in the modern casino world.

24 Pokies offers players a considerable number of deposit deals, worth up to $5,000 in all, spread over the first seven deposits a player makes at the casino. Your very first deposit is met with a 300% match and is valid up to $1,500, whilst a 200% bonus worth up to a grand is available on your second deposit. Players can claim 100% bonuses up to $500 on their next five deposits at this casino.

24 Pokies Casino offers games from some of the internet’s most decorated casino software providers. Net Entertainment, Playtech, and Novomatic are credited with being able to offer games at 24 Pokies, although there have been murmurs that the casino site is not authorised to offer games from all those developers.

The online casino doesn’t divide its games up into genres, and it doesn’t necessarily provide players with easy access to games. Something of the more adventurous slot machines they claim to be able to offer include Queen of the Niles, 50 Dragons, Werewolf Wild, Buffalo, Miss Kitty, El Torero, Glow, Wild Shark, Pyramid: Quest for Immortality, Billyonaire, Big Panda, More Chilli, Eye of Ra, and Blazing Star.

Given the exceptionally poor design of this casino and its dubious licensing information, we wouldn’t advise playing at this casino at this moment in time.

Currenty there are no reviews for 24 Pokies. Be the first one who will review it.

24 Pokies Casino supports banking methods for deposits and withdrawals for