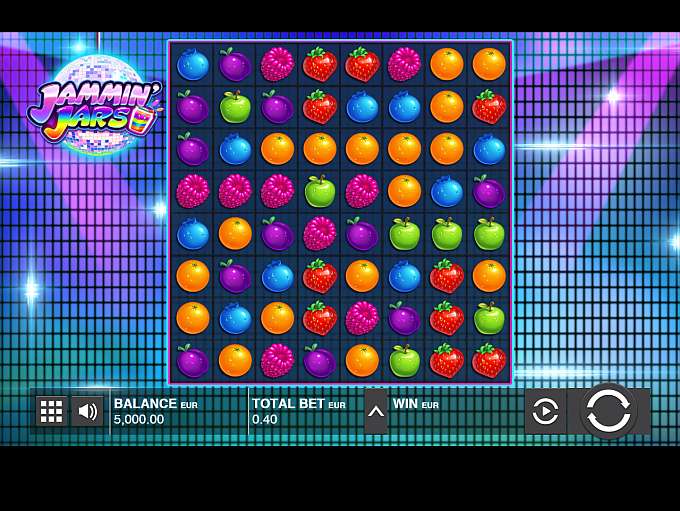 Push Gaming’s Jammin’ Jars is a fruit-themed slot (of sorts) and one which is played over a vast screen. There are 8 columns and 8 rows of symbols, all of which are represented by fruity imagery, such as raspberries, plums, oranges, apples, strawberries, and blueberries. There are no paylines present on this 8x8 grid, and instead of landing matching symbols on lines, players are instead greeted with a Cluster Pays format of gameplay. You need to match clusters or groups of symbols to win. This makes wagering on Jammin’ Jars a doddle, with minimum and maximum bets ranging from 0.20 up to 100.00 a spin. At most, players can hope to win around 100x their total bet on this game, which comes with a 96.83% RTP (return to player) rate.

Any winning combos which appear in Jammin’ Jars will disappear from the reels, and ultimately be replaced by new symbols. This gives you a chance of landing multiple wins with a single spin in this game.

You might think that there wouldn’t be too many special features in this game. Well, there are more than enough to suffice the kind of gameplay that players will enjoy, and more than you might expect.

First and foremost, there are wild symbols. These appear as multi-coloured jam jars, and they can substitute for all other symbols in the slot. When wilds appear in winning combos, they will remain in place where other symbols disappear, and push a multiplier onto the screen which could be worth as much as 5x in all.

At any point in the game (well, randomly on a non-winning spin anyway) a Rainbow Bonus could occur. This can see a 3x3 fruit symbol appear on the reels to give you an added chance of forming a win.

There is also a free spin bonus round in the slot. When jam jar wilds appear on the reels at least 3 times, they will trigger such a feature. Yes, wild symbols are also bonus-triggering symbols in this game. A total of 6 free spins will be offered to players to start off with, and any jam jar wilds which appeared to trigger the bonus will remain in place throughout the feature. This means that you’re guaranteed to play with at least 3 locked wilds for the entire free spin bonus.

Currenty there are no reviews for Jammin Jars. Be the first one who will review it.