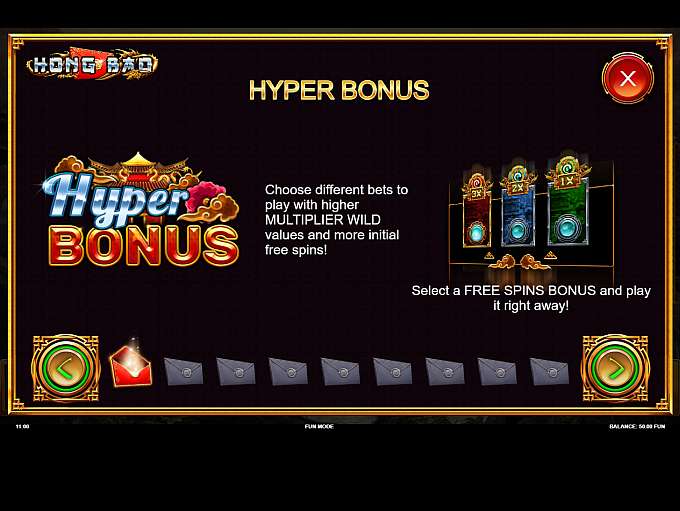 Hong bao is a slot game developed by Kalamba games; As you can probably guess, Hong bao has an oriental feel to it. The game is based on a Chinese theme and draws its inspiration from the oriental culture. The name Hong bao means red envelope and if you are conversant with ancient Chinese culture then you should know that this kind of gifts (red envelopes) are gifts given on special occasions. The dive into ancient oriental culture happens on a set of five reels and fifty pay-lines. The game takes you on a voyage through mystical mountains surrounded by villages. As you move around you will interface with alluring maidens and bearded men.

As expected, the background sound used in the game has an oriental flavor. The game is a high volatility game with a very high payout, however, the RTP value is quite dynamic. The game’s RTP values varies in accordance with your hyper bet level. The values range from 94.74% to 97.50%. As this values increase, the more likely you are to bag a win. The wagering limits start from € 0.3 and can go up to more than two thousand Euros per spin. But your quest for big gains lies in the hands of the game’s wild: a lucky golden coin, which like most wilds replaces all standard symbols. Want to bag a reward to the magnitude of 8.3x your stake? Land five of these symbols on a full pay-line.

In this respect, there’s a unique feature to look out for: a collection meter positioned to the right of the reels. The collection meter “collects” all red envelopes that show up in the base game. When the count of envelopes collected reaches fifty, you qualify for the bonus spins feature, albeit, at the lowest level (which is the bronze level), but you can wait till you have accumulated enough envelopes to play at the next level (the silver level, which requires one hundred envelopes to get into). There’s also the gold and platinum levels which require 150 and 220 envelopes respectively.

Currenty there are no reviews for Hong Bao. Be the first one who will review it.