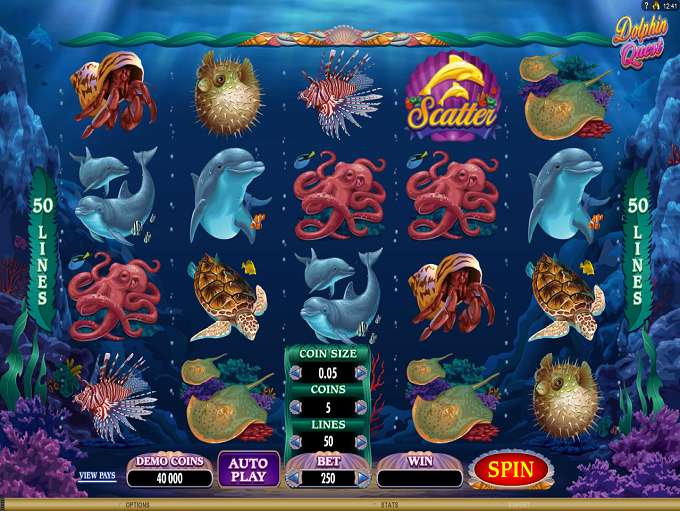 Dolphin Quest is one of Microgaming’s less ambitious video slots, although it is widely distributed in the online casino world. Dolphin Quest contains a total of 5 reels and 50 lines, and is played in the same aquatic, underwater, ocean going animal theme as many other similar games. Dolphin Quest will permit players to adjust those 50 lines, and choose coin sizes of 0.01 up to 0.50. Players will also get to wager anything from 1 to 5 coins per line. In total, you can expect to wager anything from a low of 0.01 per line, per spin, up to a high of 125.00 per spin on this slot. At most, you can expect to scoop up to 75,000 coins via the game’s non-progressive jackpot.

Dolphin Quest is quite a unique video slot machine game, in that it contains a scatter and a wild, all in one symbol. This doubly powerful symbols frees up space on the reels, so that players have a better chance of landing wins with other icons. The scatter and wild icon can substitute for all symbols in the game, barring the Dolphin Quest logo.

That Dolphin Quest logo appears stacked in this game, and is another wild icon. It can replace all other symbols save for scatter icons. Any slot machine which features two wild icons is always going to be a hit with players. This might explain why the slot has been so successful, despite not having a theme which is particularly extraordinary.

Now back to the original scatter/wild symbol. This scatter and wild icon can appear on the second, third and fourth symbols only. When it does appear on all three at once, it will trigger a Dolphin Quest bonus round. Microgaming’s bonus rounds are always good fun, so you expect plenty of that in this feature. In this bonus round, you’ll get to play a three-reeled slot machine game. Players need only hit the “stop the reels” button to see what they have pocketed. Wins can vary in size, and unlike many other slots, free spin wins tend to be fairly frequent. The unique features of this “free spins” bonus round make Dolphin Quest stand out, and again, this could help us understand why what amounts to a simple themed slot has become so popular in the online casino world.

Currenty there are no reviews for Dolphin Quest. Be the first one who will review it.