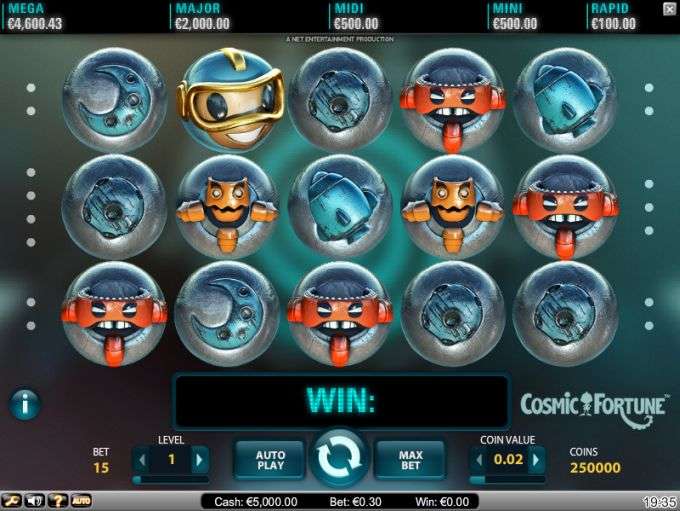 This game is temporarily unavailable
Please see other games from the same category.

Cosmic Fortune is a Net Entertainment developed slot, and one which has a slight Space Invaders tone to it, as well as a truly original and creative bonus round. The slot also features far flashier graphics than many other simple alien themed video slots. The video slot offers a total non-progressive jackpot of 1,470,000 coins to be won, and is played over 5 reels and 15 paylines. Players can select minimum and maximum coin sizes of 0.02 up to 0.50 in this game. They will also have the chance to bet on ten different levels. At its cheapest, this space themed slot will set you back just 0.15 per spin, whilst at its most expensive, it can see you wager as much as 75.00 a spin. This slot is also a progressive jackpot slot.

The “W” ball in this game is Cosmic Fortune’s wild symbol. It can appear randomly on the second, third and fourth reels only, and replace all other icons in the game, barring scatters. Wilds have no monetary value on their own.

The “S” zig-zagged shape sphere is the Free Falls symbol. When 3 of these scatters appear randomly anywhere on the reels, then 10 Free Falls (free spins) will be activated. You’ll get an additional 5 Free Fall for every additional scatter appearing on the reels.

After the Free Falls feature has ended, a bonus round is triggered, known as the Free Falls Bonus. In this bonus round, a UFO will drop marbles down through a bonus game (sort of like those old penny machines), and if players can land marbles in cups, they will win cash prizes. Coin wins cups offer instant cash prizes, although landing coins in Jackpot Collector Cup will trigger another bonus round, the Jackpot Game.

In the Jackpot Game, players will notice 5 cups on the screen, namely five jackpot prizes. Each of these jackpot cups contains a metre, which lights up with every coin that lands in the cup. Once three hits have been landed on a cup, that progressive jackpot is paid out. Cosmic Fortune carries five progressive jackpots, namely the Rapid, Mini, Midi, Major and Mega progressive jackpots. The prize ranges for these jackpots tends to be 100, 500, 500, 2,000, and 4,000 credits and upwards, respectively. Naturally, the longer this game goes without having any of its jackpots won, the bigger those progressives will be worth.

Currenty there are no reviews for Cosmic Fortune. Be the first one who will review it.