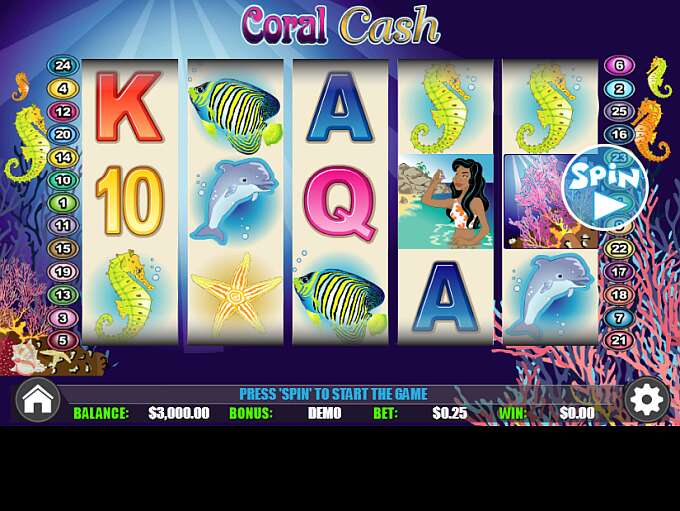 Coral Cash is an online video slot which features an underwater theme, and is based on some of the oldest lifeforms on Earth. Graphically, this Amaya (originally Cryptologic) developed slot is quite poor. From a gameplay perspective, it also fails to offer you too much in the way of hot features and exciting gameplay. The 5-reel, 9-payline slot is cheap to play all the same. Line bets range from 0.01 up to 10.00 in total, and players can only stake one coin per line. They can however bet anything from a minimum bet of 0.01 per line, per spin, up to 90.00 per spin. The slot also contains a progressive jackpot, although it is one of the smaller ones available on the net. Known as the Rapid Fire Jackpot, the prize it offers tends to settle around the 1,000 credits range.

Coral Cash’s substitute symbol is a bather. When this gorgeous girl appears, she can replace all other symbols in the game, excluding the scatter icon. Wilds also serve another purpose, since they can offer players a top prize pay-out worth around about 8,000 coins.

Scatter icons appear in this game as coral reef symbols. You can pocket scattered wins of 1x, 5x, 10x or 100x your total bet, if 2, 3, 4, or 5 of them appear in any positions on the reels. Oddly enough, though, you do not need three or more scatters to trigger the bonus round.

The Rapid Fire Jackpot can only be won at random in this game. This can be at any point in gameplay, and doesn’t necessarily require the player to land a win. A perk like that can really make a mediocre gaming experience into a semi-decent one.

The free spins bonus is a pretty standard affair in this video slot. Players will be given a total of 15 free games to spin. During this bonus, all wins in the free games feature will be multiplied by three times their normal rate of pay. You can also retrigger the free games feature by landing additional girl and scatter icons on their respective reels.

Currenty there are no reviews for Coral Cash. Be the first one who will review it.