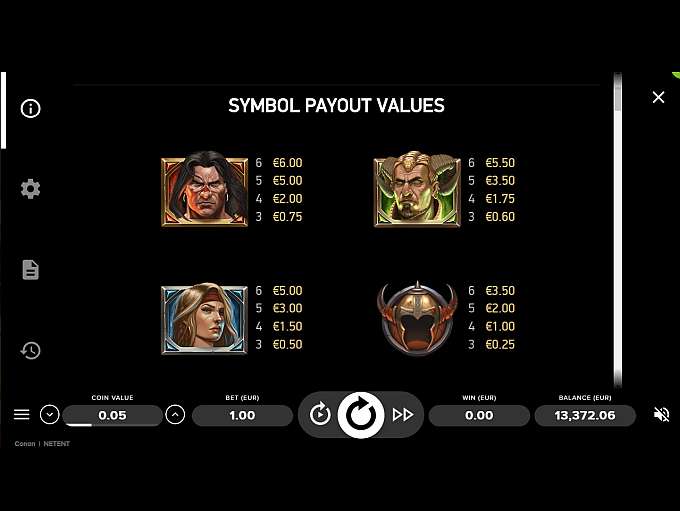 Conan is a medium variance video slot by Net Entertainment with 24 paylines, 6 reels, and 4 rows. Its concept is based on Conan the Barbarian and features an unusual system that pays both ways. In the epic 1980s Hollywood blockbusters Conan the Barbarian and Conan the Destroyer, Arnold Schwarzenegger immortalized Conan. Conan is an exciting experience for fans of the genre, and one of the most brutally enjoyable 3D slots NetEnt published in 2019. Conan slots' top jackpot (non-progressive) on a single spin is 1,008x (£$201,600) your wager.

The Free Spins (Thoth-Amon) feature is at the center of the slot machine, and it allows you to choose between three different free spins. The Temple of the Serpent's high volatility free spins feature awards you 50 free spins with up to 7x multipliers. Tower Wilds, Mystery Symbols, Mystery Multiplier, Linked Reels, and Battle Wilds add to the excitement of the game. They improve gameplay in both the main game and the free spins. Because the Free Spins feature is the most profitable, it is in your best advantage to activate it. You'll need three, four, five, or six scatter icons to enter the feature. You can choose from the City of Thieves, Temple of the Serpent, and The Walls of Tarantia once the extra round has been triggered. The scatters are linked to the free spins you'll receive.

Snakes, falcons, lions, grappling hooks, swords, helms, Conan, scatter, Tower Wild, and Battle Wild are among the symbols that occur on the reels, which are set against a snow-capped town backdrop. Conan is the most valuable symbol; if you can get a whole screen of them, you'll win 144 times your bet in cash. Conan, Valeria, and Thusla Doom are premium symbols. Six of them anywhere on the reels pay 5x to 6x your stake, independent of their location. Conan's Average Return to Player Percentage is 96.28 percent, with a hit frequency of 24.9 percent.

Conan is divided into three categories in terms of slots. Each is 24 inches in diameter and has its own set of characteristics. When the Blue Tower Wild appears on reels 1 or 2, it expands to replace all adjacent symbols (except the scatter.) This can happen in one of two ways: it can cover the entire reel or only a section of it. The Mystery Symbols on reels 3 and 4 become matching symbols when they appear. If they appear stacked, the Mystery Multiplier bonus will be activated, with multipliers ranging from 1x to 7x.

You'll trigger the Thoth-Amon feature if you keep grinding and land a mysterious symbol that combines with the Battle Wild and Tower Wild. When three to six mystery symbols appear on the second and fifth reels, the payouts are multiplied. When the Red Battle Wild appears on reels 5 and 6, it expands to cover up to three spots in a sideways pattern. More big payouts are available when the reel pairs in the 24 sections join.

Currenty there are no reviews for Conan. Be the first one who will review it.