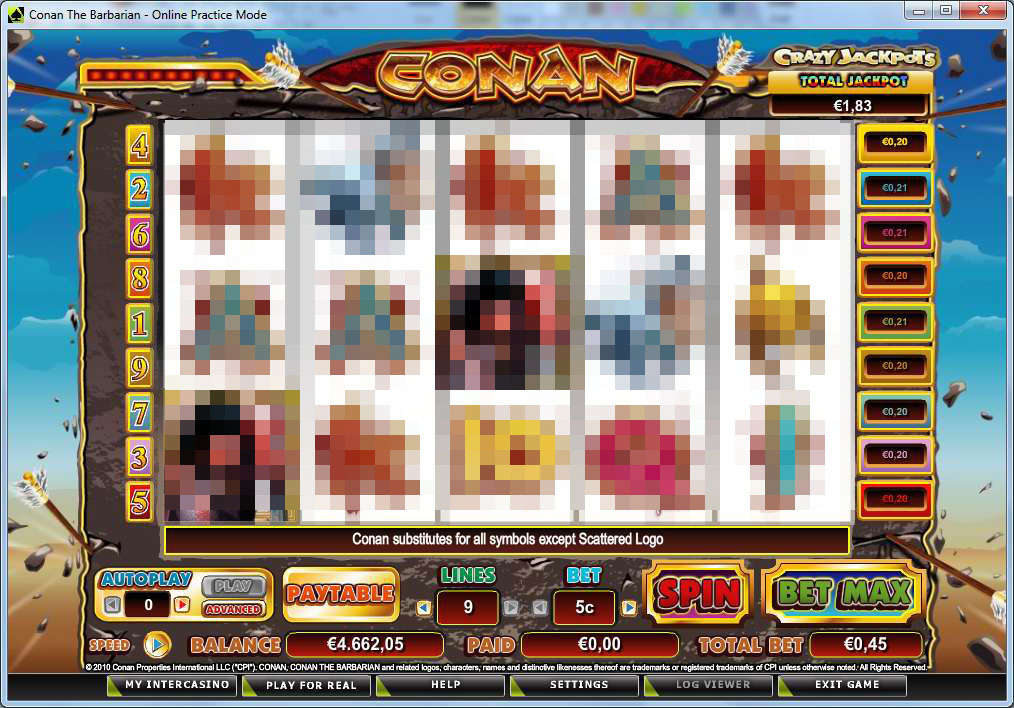 About Conan the Barbarian

CryptoLogic has taken a literary classic and transformed it into a 5-reel and 9 pay line visual adventure. There’s even an introductory video that shows some of the exploits of the mighty Conan the Barbarian.

The icons include standard playing card values A, K, Q, J, 10, a legionnaires helmet, a brutish troll, a seductive maiden, an evil sorcerer and of course Conan himself. Start your spins from as little as 5 cents right up to $5 which can bring your total bet to $45 per spin if you activate all 9 pay lines.

Pursue the top fixed jackpot at 750 coins by forming combinations from left to right except for the scattered logo. You can even set the autoplay feature to keep the wheels turning if you need to step out for a bit, and modify when you want it to stop depending you win or losing conditions.

The most rewarding aspect about Conan the Barbarian is that it contains nine super Crazy Jackpots. That’s right, one for every pay line! These jackpot amounts are determined by the amount of the wager made so the top score will only be made by a full bet of $5 on that line.

Simply get five Conan the barbarian symbols and the jackpot will correspond to that particular pay line as can be seen in pay table. What’s more is that this symbol also acts a wild standing in place for all other symbols except for the Scattered CONAN logo sign. The combination of a jackpot with wildly formed lines can give rise to truly epic wins. To keep it fair, every player has the same probability of winning a Crazy Jackpot.

When Conan’s name appears in fiery letters surrounded by a golden frame then you know you’re in for a treat. This scatter awards a 2x multiplier when two of them appear anywhere on the reels. But it’s when three or more appear on that the adventure truly begins. For starters the multipliers increase to 5x, 20x or 100x for 3, 4 or 5 scatters on screen. Conan also boldly approaches s the Cave of Skulls to find what mysteries behold him in the future.

Fifteen glowing skulls hang on chains from the ceiling and it’s up to you to decide which order you want your mighty warrior to slash them down in.  Each skull will reveal prizes and multipliers to bolster your bankroll. But be careful, some of the skulls contains hidden traps that will quickly end you quest for answers. Once done in the cave, you will return to the slots.

Currenty there are no reviews for Conan the Barbarian. Be the first one who will review it.