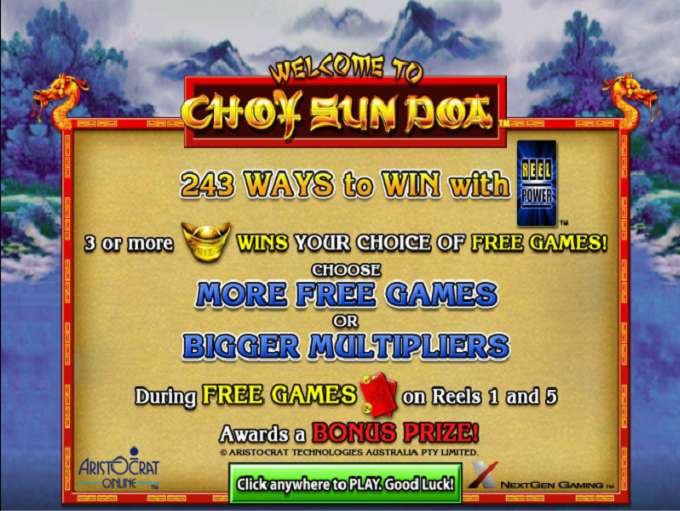 Delve into the mysterious Far East Asian mountains in an online slot game with an Eastern theme - Choy Sun Doa, comes from Aristocrat Gaming, an Australianbased casino games developer.It offers 243 different ways to win across five reels and a minimum wager which starts at only 0.01. The maximum coin size is 2.00 which makes it a maximum wager of 50.00, and a maximum in-game prize of 1000.00. Not the best top prize, not the best game we have seen, but then Aristocrat are not well known for being top of the heap in terms of prize offering or design.

Choy Sun Doa is Chinese, obviously, and this means the God of Wealth. But don’t let the oriental theme put you off the game, it is just as simple for Westerners to play, as it is for the Eastern player to understand. Choy Sun Doa is the wild icon which animates, and substitutes for all other symbols except the scatter.

The Scatter icon is an oriental golden hat, while other icons include a Dragon, Jade Ring, gold coin, Koi fish, and what might be a purse filled with gold. All other icons take the shape of card indices from Ace through Nine, illustrated in keeping with an eastern theme. Graphic rendering is really quite simple, but more than adequate to keep the slots fan playing, unless they are into the more sophisticated graphic designs. In which case there are more than adequate choices of online slots that will fit the bill.

After winning, the gamble feature lights up, where the player may choose between black and red suits in a deck of cards – take care not to lose all your winnings in this game. There is also an auto play button on offer which will keep the game rolling even when the player is out of the room. Auto play choices range from five to five-hundred spins. While ambient sounds are a little bit basic, this online video slot has all the normal bells and whistles needed to keep the player well entertained.

Land three scatter symbols (the golden hat) on an active pay line to trigger the bonus feature. This is a “pick them” type feature, but unfortunately this writer did not manage to enter, so, it will have to remain a surprise.

I love this game just let me keep playing thanks