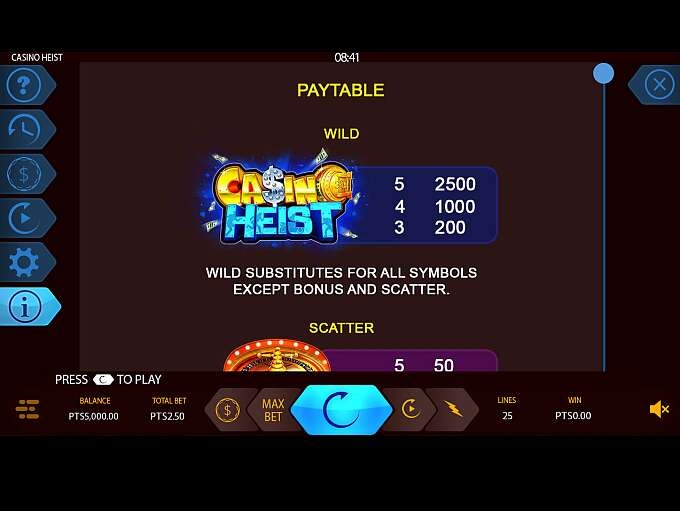 Casino heist, an online video slot from expanse studios, features a gang of criminals on a mission of attempt to take on theft. The payout percentage of this slot is 94.96%, slightly below average, but players are assured of good payouts whatsoever, and the audiovisuals available are excellent. The game is set on 5x3 reels filled with casino-themed symbols with 25 fixed pay lines. High paying symbols include the rolling dice, golden keys, a guy partner, and a girl partner, while the low paying symbols come in the form of cards, A-J, that come with casino chips attachments.

To generate a win in casino heist, they need to align three or more matching symbols in any one of the twenty-five pay lines. The minimum bet is 0.25 credits, which is a good choice for beginners to interact more with the game. The highest stake lies at 25 credits, a decent amount, but some players term it low. It has fancy graphics and a soothing musical background with unique features, including the wild symbol, free spin, and a great bonus of the casino heist.

The collection of three or more scatter symbols anywhere on the reels attracts a 10x free spin. If a player lands any wins during the free spin feature, they get a bonus of a 2x multiplier. This means double the wins. However, free spins cannot be retriggered, but the wins in this feature are thrilling. Casino heist also has a wild symbol that pops in the reels in the game's logo. It is the highest-paying symbol that acts as a substitute for all the characters in the game.

Acquiring more than three bonus symbols in a casino heist translates to a casino height bonus game that contains three levels. A player receives either a 2x, 4x or 10x multiplier in every class. The multiplier you receive depends on whether the player had selected three, four, or five symbols for them to trigger the round. While in level one, for the player to move to the next level, they need to have punched a security guard five times. The second level will lead a player to a door referred to as a vault door that requires blasting with explosives five times to proceed to level three. The last level now allows the player to access his money where they collect it from the vault.

Currenty there are no reviews for Casino Heist. Be the first one who will review it.