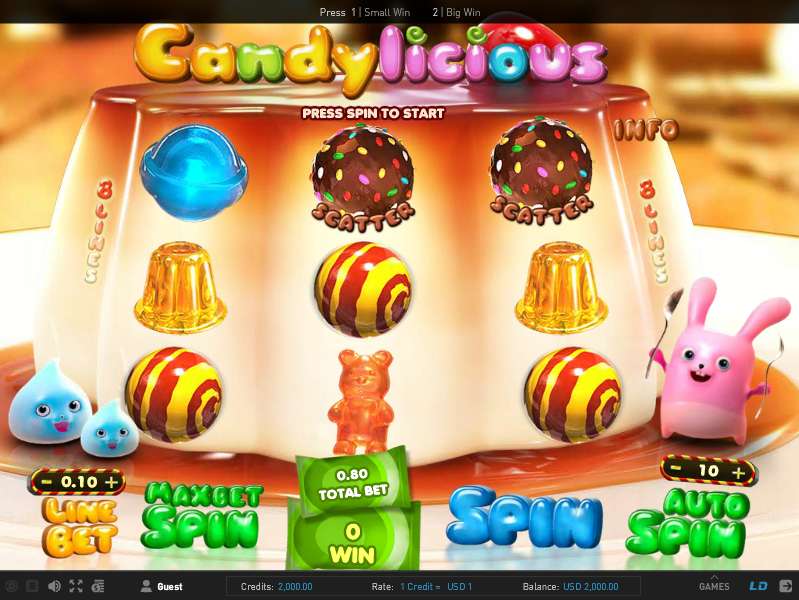 This 3D slot machine has been designed and developed by GamePlay Interactive, and is quite heavy on older systems, due to the nature of its 3D graphics. The slot machine not only features wonderful 3D graphics, but also a very simplified form of gameplay. There are just 3 reels for you to bet on, with the symbols floating on those reels. A total of 8 paylines appear in the game, but those cannot be altered. Instead, players can choose to wager anything from a floor of 0.15 per spin, up to a ceiling of 20.00 per spin on this slot. Expect to be able to win as much as 3,000 coins in total in this game. Candylicious is quite obviously supposed to resemble Candy Crush Saga, so it may draw in a decent crowd from online casino players who love that game.

Candylicious doesn’t contain any special symbols. Instead, players are going to have to rely on the standard paying icons to do a job for them. The jelly bean, grape, gumball and green candy are worth the least, with wins ranging from 15 to 40 coins. Players can win substantially more when they land orange pudding, star, heart, lollipop or cola bear symbols on the reels, with prizes stemming from 50 coins up to 400 coins.

The best-paying symbol in the Candylicious slot is the chocolate sprinkle. This ball-shaped symbol can see players win as much as 3,000 coins. However, players will need to land this symbol across the screen – meaning that 9 symbols need to appear. Just bagging 3 of them will only see you win 5 coins, which is a pittance, really.

Candylicious certainly doesn’t have any special features, and that of course means that there are no bonus features, either. The lack of special features is worrying, although not altogether strange for a classic slot. However, there are classic slot machine games out there on the net which do at least carry wild symbols or scatters icons. The fact that this slot has neither is a bit of a buzzkill, no matter how good its graphics may be.

Currenty there are no reviews for Candylicious. Be the first one who will review it.