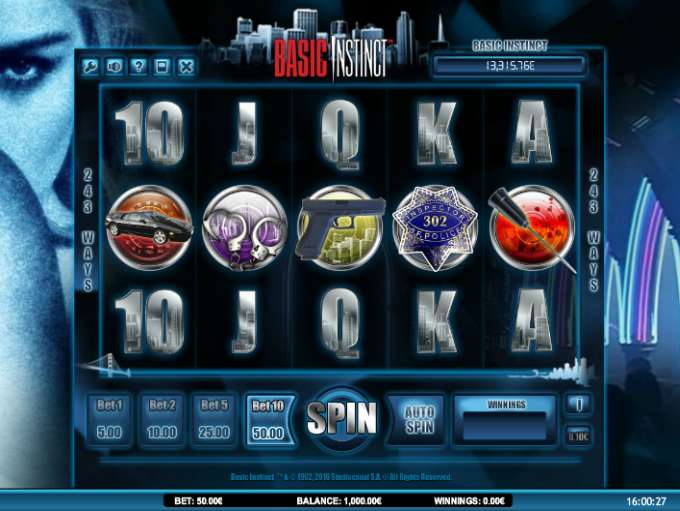 Based on the 1992 film Basic Instinct, we now find a video slot themed on this famous film starting Sharon Stone and Michael Douglas. Presumably under license from Studio Canal which owns the rights to the movie, iSoftBet has taken this intriguing idea and turned it into a five reel, slot which offers 243 ways to win. It also offers what looks like a progressive jackpot prize that currently stands at 1443, and many other ways to win.

When the mysterious and beautiful Catherine Tramell (Stone), a becomes a suspect in the brutal murder of a famous rock star, she is investigated detective Nick Curran (Played by Douglas). She seduces him while the case becomes more complex, and in one particular scene she crosses her legs. This leg cross is the most paused moment in movie history, and now we have it all wrapped up into a nice video slot package.

Three stacked wild icons are featured in Basic Instinct, all featuring Stone in her role as Catherine Tramell. There is a Bonus Wild, Free Spins, and Wild Drop. The Wild Drop substitutes for all other symbols except for the other two stacked wilds. When this icon appears on a full reel it drops down one position, still substituting, while the other four reels re-spin.

Balance of high paying symbols are a DNA test, police badge, handcuffs, gun, and limo. Lower paying icons are traditional card indices, Ace through Ten. Players are able to bet one, two, three four of five, in coin denominations of 0.01 up to 0.10 which makes for a top wager of 50.00. This is anyone’s game and can be played for a relatively good price.

As the stacked wilds activate all bonus features the free spins come into play when this symbol lands on the reels. It occupies all three spaced and does not remain this way for the duration of the free spins game. It simply becomes a normal wild symbol.

The Bonus game is also triggered by the Bonus Wild when it stacks, and offers players the opportunity to choose from twelve mystery boxes. Hidden amounts are awarded, but if the player clicks on the box containing the gun, the Killer Progressive Prize is awarded. Continue choosing until the handcuffs appear as this is the icon that ends the round and awards wins collected to the player.

Currenty there are no reviews for Basic Instinct. Be the first one who will review it.

Nolimit City Goes Against the Grain with Punk Rocker xWays