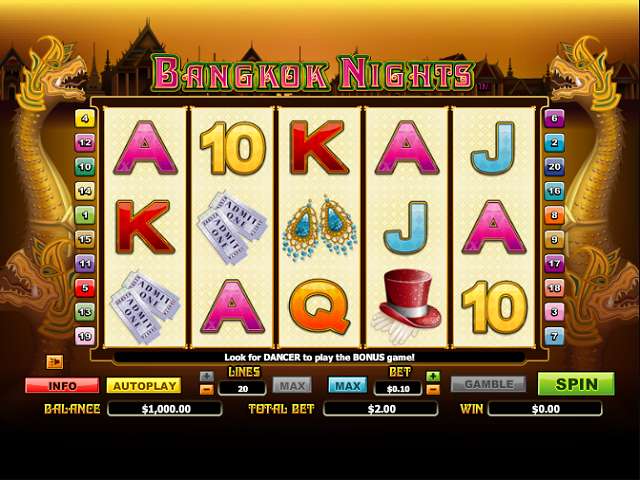 Bangkok Nights is a festival themed slot with oriental flavors. The game is designed with a 5 by 3 set and features 20 paylines. Some of the features of the game include wild and scatter symbols, a gamble game and a free spins round.

The slot also features a wagering limit that cuts across a range of gambling preferences. The betting range starts from as little as $0.01 and goes up to $250. So whether you are a conservative or aggressive gambler, or something in between, you will find a range that suits your taste.

The oriental flavored slot can be played on multiple devices spanning mobile, tablet and desktop systems.

The developers did a fairly good job in trying to blend Bangkok’s nightlife and the concept of slot gaming. The symbols used in the game are also inspired by this unique blend. The game’s paytable ranges from playing card symbols of A to 10 to symbols such as those earrings, hats, facemasks and tickets. As usual, playing card symbols make up the low value grid of the game while the other symbols make up the high value grid. The reward for landing a matching combo will depend on whether the combo is made of low or high paying symbols.

To boost the fun of the game are wild and scatter symbols. The wild symbol of the game is represented by the symbol of the jolly showgirl. The symbol can take the place of other regular symbols to form winning combinations in the game. The wild is also a paying symbol, rewarding you for landing it on the reels. Even a single wild on the reels will reward you. While a single wild symbol will reward you with just two coins, two wilds will reward you with ten coins and three wilds will reward you with 150 coins. Four wilds in view will reward you with an even bigger reward (1000 coins). Land five wilds and you will be rewarded with a mega reward worth 10,000 coins.When the wild symbol shows up on the first and fifth reels simultaneously, it will activate a special feature in the game known as the Pick and Win feature. All you have to do when the figure is activated is to choose one of two triggering symbols to unveil a cash prize. Cash rewards can go up to 100 times your bet. The feature gives you the chance of changing your pick if you are not happy with the first selection. The downside is that you have to accept whatever the second bonus offers.

The scatter symbol of the game is represented by the nightclub symbol. The scatter is instrumental to unlocking the bonus round of the game.

To enhance your winning prospects is the Pick and Win feature that will present you with another chance of landing more rewards.

Finally, there’s also a gamble game if you are feeling ambitious. The gamble game is a simple guessing game that requires you to guess the color and suit of playing cards. While the right guess will double or quadruple your winnings, the wrong guess will see you returned to the base game empty-handed so you want to apply some discretion with this feature.

Currenty there are no reviews for Bangkok Nights. Be the first one who will review it.