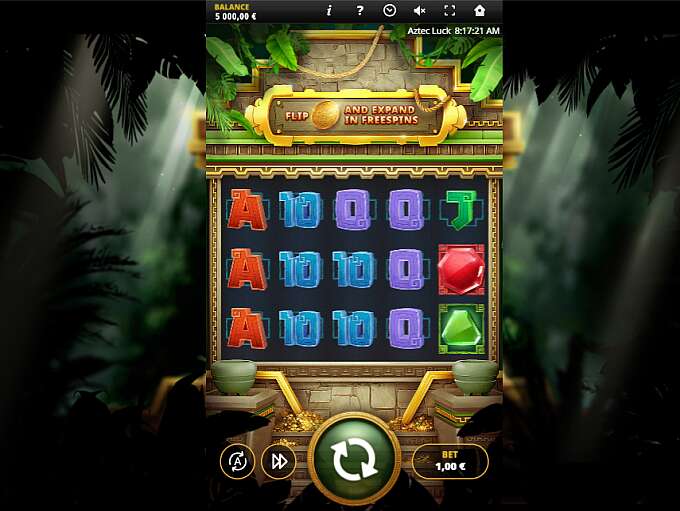 Aztec Luck from Silverback gaming is a 5 by 3 slot featuring ten pay lines. The game comes with a number of features such as wild and scatter symbols, a free spins game and a bonus round. The slot also features a wagering limit that cuts across a wide range of gambling preferences. The betting range starts from as little as $0.1 and goes up to $100.

The game can be played on multiple devices spanning mobile, tablet and desktop systems.

The plot of the game is set in the centre of a mystical jungle where an Aztec temple is the center of the gaming action. The graphics are rendered in a simple and appealing design that is nice to look at. The symbols used in the game range from different kinds of gems to the usual playing card symbols. While the former represents the high value grid, the latter makes up the low paying symbols of the game.

The game also includes special symbols such as wild and scatters. The Fortune Wild can take the place of other regular symbols to land winning combos in the game. The wild is represented by a gold coin which flips to unveil itself.

Then there’s a scatter symbol which is also represented by a coin with the inscription Spins of Plenty. The scatter will reward you for landing it on the reels. The more symbols the better. If you are lucky to land a combo of five scatters, you will attract a reward worth 5000 times the value of your bet.

To activate the free spins round of the game, you will need to land three or more scatters on the reels. Once this happens, you will be ushered into the realm of free spins but not before the scatter-based prize has been paid. The feature starts by awarding you seven free spins. The feature can be re-activated. Before the commencement of the round, the temple will choose your lucky symbol from any one of the regular symbols of the game. Whenever the lucky symbol lands during the free spins round, It will expand to occupy an entire payline.

Currenty there are no reviews for Aztec Luck. Be the first one who will review it.