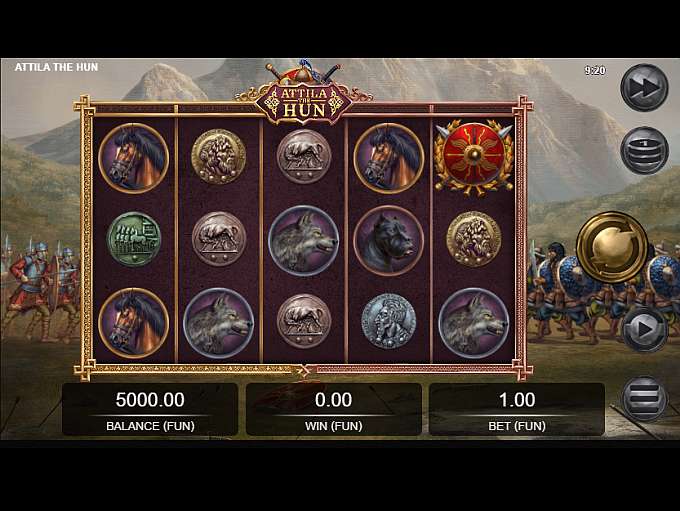 About Attila The Hun

Attila the Hun is a slot game developed by Relax Gaming. The game draws inspiration from ancient civilization and comes loaded with symbols such as the traditional wild symbol, sticky wilds and a respins feature as well as a free spins game and a mega symbol feature. The game comes with a 5 by 3 set featuring twenty pay lines.

The fun slot also features a betting range that will appeal to a wide range of gambling preferences. The wagering limit starts from as little as $0.10 and goes up to $100.

Attila the Hun can be played on multiple devices spanning mobile, tablet and desktop systems.

One of the first things you will notice once the game loads is an interface modeled after its theme. The interface is a graphic representation of a battlefield. The symbols used in the game also resonate with its theme. Some of the symbols you will be looking to form matching combinations with include those of a blue Hunnic Shield and a red Roman shield which represent the most valuable symbols in the game. The Hunnic shield will pay you 15x the value of your stake for landing a matching combination of five while a combo of Roman shields will offer up to 20x the value of your stake for five. As you move down the value grid, you will find mid-paying symbols of wolves, war dogs and horses. At the bottom of the value grid you will find a quartet of old coins.

To boost the fun of the game and help you land matching combinations is a duo of wilds represented by the Hun and Roman soldier symbols. These symbols can take the place of other regular symbols to form winning combinations in the game.

The game also features an interesting phenomenon in the form of a wild respin feature. The feature is triggered when one of the two wilds show up on the reels. During the feature, wild symbols will become sticky and move across the grid in opposite directions. The feature comes to an end when wilds disappear from the grid. Wilds are also instrumental in triggering the free spins round of the game.

The Small Battle Free Spins round is activated when the wild symbols of the game occur on the same row. After the feature is activated, a 2 by 2 wild symbol will show up on the reels over the course of the feature.

There’s also the Attila or Aetius Walking Wild feature which shows up when Aetius and Attila show up on the first and fifth reels respectively. After the feature is activated, anywhere from two to fifteen walking wilds will be released on the reels.

There’s also the Big Battle Free Spins which is activated when you land the opposing general. During this round, all wilds take the form of a 3 x 3 symbol.

Currenty there are no reviews for Attila The Hun. Be the first one who will review it.