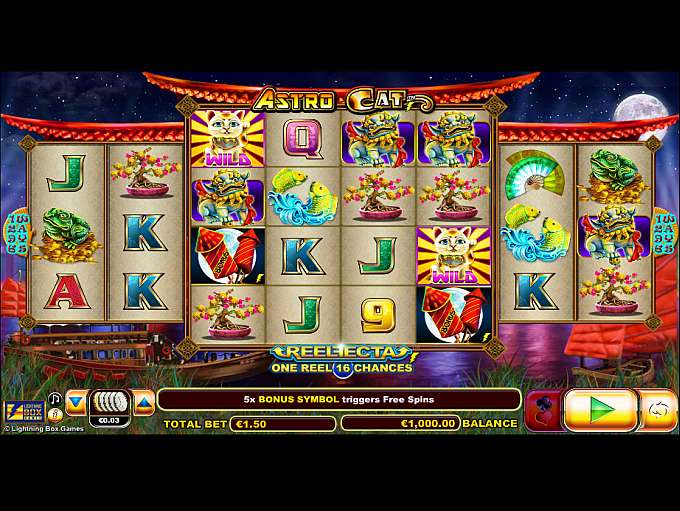 Online video slots come at a time a dozen but when one as unique as Astro Cat comes along, it’s worth paying attention to. Lightning Box Games have taken an Asian flair with this game by combining both Chinese and Japanese cultures together. It harbours symbols like money frogs, pair of Koi carp, bonsai trees, oriental fans, and guardian lions. The playing card values 9, 10, J, Q, K and A make up the remainder.

You first look at this slot you may be overwhelmed by the 28 symbols on screen and wonder how on earth you possibly play it. It’s rather quite simple really as it functions like a normal 3 x 5 slot with first, second, fourth and fifth columns acting like regular reels. The 4x4 grid in the centre acts just like a giant middle third reel. So in order to win a prize you need to get at least three of a kind across the reels starting from left to right, for example if you have a bonsai tree in columns one and two you just need the bonsai tree to appear anywhere in the 16 square grid in order to complete the combination.

Now this middle box has a special name called the Reelfecta which contributes to this game’s 1296 different ways to win. You won’t have to pay a wager for every single one of these lines as the system works with set values of coin denominations that are multiplied by 50. The minimum value you can set is one eurocent which will make the total bet €.50 and the max value of €10 your total bet will be €500 per spin. These types of slots are really popular in the Asian market due to these greater chances of winning.

For those players who like to take extra ventures and who are not happy with small wins then they can use the Gamble Feature. Simply put you have five chances in which to double or quadruple your winnings by guessing which playing card will appear next.

There is a wild symbol represented by the Maneki Neko Cat, which was made popular in Japanese culture as the beckoning lucky cat and only appears on reels three and four. Wilds standing for other symbols and are great for wins.

Things get really exciting when you get at least five of the firework scatter symbols anywhere on screen as this will activate 12 free spins. The first three are guaranteed wild symbols and you hope to get 12 of them in a row because when this happens you will trigger one mega spin! When all the Reelfecta squares are filled you are in for a massive jackpot!

Currenty there are no reviews for Astro Cat. Be the first one who will review it.