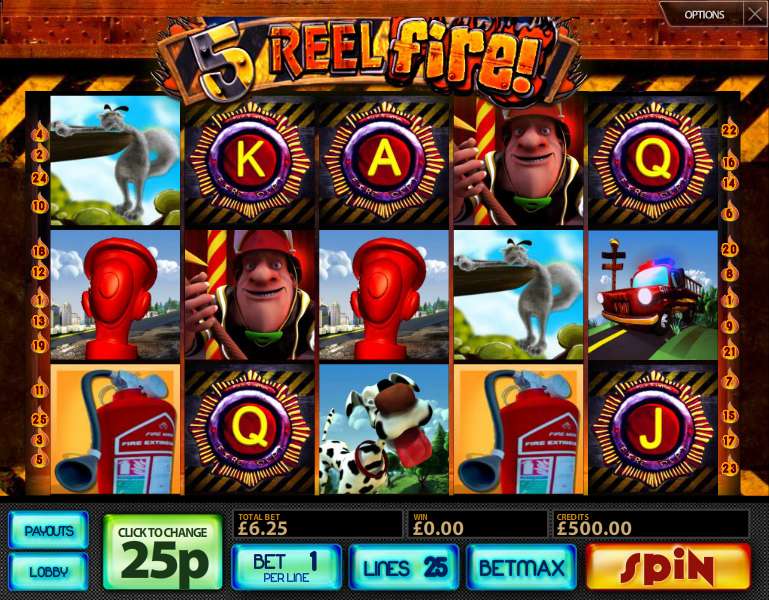 MultiSlot are the developers for the 5 Reel Fire video slot. This game is themed on fighting fire as opposed to lighting them, so, if you always wanted to be a fireman when you grew up, and didn’t quite make it, this could be the game to play. It is a five reel, twenty five pay-line game with a highly flammable top in-game jackpot prize of 15 000 coins.

Graphic rendering is very good and animations are smooth, while not exactly 3D HD quality. Icons are all (ahem excuse the pun), iconic of the fire-fighting profession, with a fireman symbol which pays 2500 coins when five drop onto an active pay-line.  Others are a cute little spotted Dalmation dog (archetypical dog of choice in a fire station), a fire truck, extinguisher, hydrant, and cat precariously hanging off a ledge. The balance of symbols is made up of Ace, King, Queen, Jack and ten, all illustrated in the form of a fire-fighters’ badge.

Ambient sounds while not truly redolent of the them, are we think meant to be fun, although a fire engine siren does go off when this icon is involved in a win. Most of the icons animate when they make up winning combinations in fact, for example the dog barks, and licks the space in front of its face, the cat meows, and the extinguisher puts out the fire.

Special symbols players need to look out for are, a Wild which substitutes for all other icons except the scatter and bonus. This is a fire, while the scatter is a fireman’s hat and face protector. Betting ranges from one through to five coins per line, and between one and twenty five lines may be set by the player. The minimum wager is 5p, while the maximum is 1.00. Therefore a minimum bet across all twenty five lines, costs the player 1.25. A maximum bet is 125.00, but that tempting 15 000 jackpot prize may actually justify playing this.

The scatter triggers free spins of between five and fifteen, and this is also the bonus game. Basically landing three fire-helmet scatter icons gives the player three free spins. Four of these symbols pays ten free spins, and five will hand out fifteen free spins. Not really a bonus game by our standards, but better than nothing we suppose. During our period of play in this slot we were unable to land any free spins, but that’s how the cookie crumbles sometimes, at least we were kept well entertained.

Currenty there are no reviews for 5 Reel Fire. Be the first one who will review it.