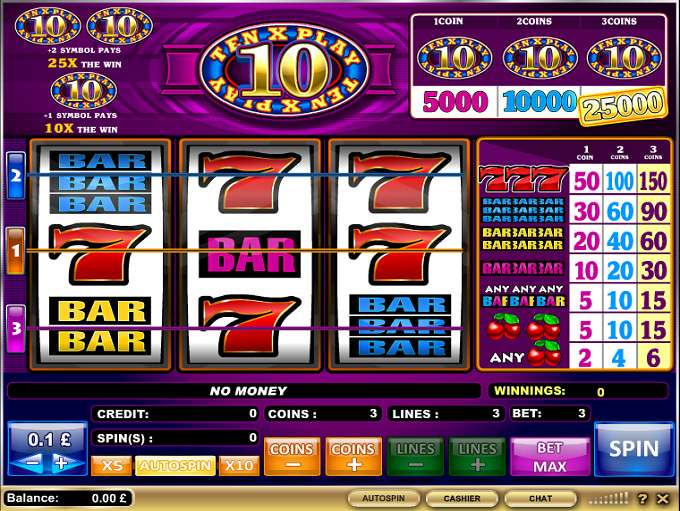 iSoftbet has developed this game in a traditional manner, though there are a few twists. It resembles the slot machines you might have found in casinos or other gambling locations many years ago, but the payoffs are potentially much greater.

10x Play slots has three reels and three pay lines. This is unusual for a traditional type of game, which normally has just one pay line. You can play with coins that are worth anywhere from 0.01-3.00. The maximum bet on a line is three coins, which means the maximum bet on each spin is 27.00. The maximum payoff is quite high. You can win as much as 75,000.00 playing 10x Slots.

Almost all of the symbols in this game are ones that have been on slot machines for a long time. There are the Cherries, the Bars and the Magic 7's. As usual, you'll win with any Cherry and you'll also win if you get any of the Bars across one line. You'll get more if you get three of the same bar.

What makes 10x Slots different from other traditional games is the 10x symbol. You'll collect the top jackpot of 25,000 coins if you played the maximum coins and you get three of those symbols on one pay line.

You don't have to play the maximum coin size to get the 25,000 coin payoff, so if you don't want to bet 27.00 on every spin, you can lower the value of the coin to the level that you're comfortable with.

An extra feature of the 10x symbol is that it operates as something of a Wild. You don't have to have three of them on a line to collect. Even one will give you a very nice return. Of course, the payoffs are huge for three, but even one 10x symbol returns 10x your bet.

If you get two 10x symbols, the payoff increases to 25x your bet, which is the fourth biggest payoff in this game. Only three 10x symbols, three 7's or three Double Bars offer bigger returns.

Game will not load for me?