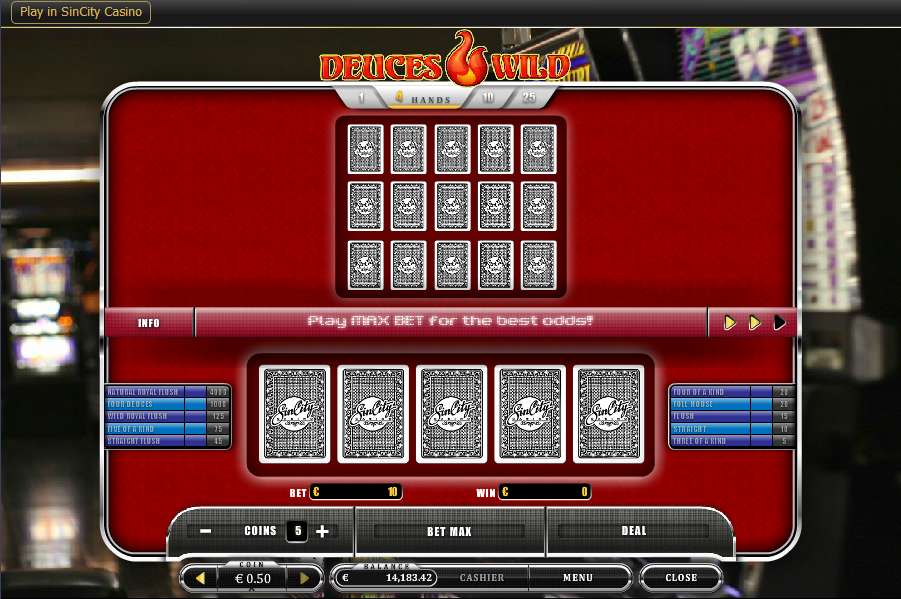 This version of “Deuces Wild” has been brought to online playing fans from the stable of Oryx Gaming. This company was founded in 2010, so, is a relatively new kid on the block, but are already establishing a good reputation. We are seeing more and more e-gaming products being designed, and the competition is pretty tough, so, they all need to be top of their game.  A top prize of 4000 coins can be won for landing a Natural Royal Flush.

Its special features are Deuces - a version of video poker that most fans have become familiar with – the version where the number “2” card is a wild card, and substitutes for all other cards to create even more winning combinations. In this smoking hot game between one and twenty-five hands can be played simultaneously, in sets of one, four, ten or twenty-five.

Betting can get pretty steep when twenty five hands are played, say nothing of keeping up with so many hands. We suggest start small and work your way up with experience. Although havingtwenty-five hands in play does help create more winning opportunities. Fans of video poker should not pass this game by.

Coin size starts at 0.02, and increases in size through 0.05, 0.10, 0.20, and 0.50. Playing all hands at the maximum wager costs 10.00 over five coins, and this is the only bet with which to win the maximum prize. Hand rankings are more or less traditional, starting with a Natural Royal Flush in first place, through Four Deuces, Wild Royal Flush, Five of a Kind, Straight Flush, Four of a Kind, Full House, Flush, Straight and Three of a Kind.

We are always in two minds about whether a gamble feature can be considered a bonus, it all depends on the individual player really. What is unique about this game of Deuces Wild is the fact that the gamble feature is split into two parts. The player is able to gamble all of their winnings or half their winnings and gamble this amount to double the prize. For example if the player wins 5.00, they may half the gamble to 2.50, to win 5.00, and if they lose, not all is lost. We thought this was rather a nice approach to a video poker gamble feature.  Simply click the button “Double To” or “Double Half To”, and the game is on.

Currenty there are no reviews for Deuces Wild. Be the first one who will review it.