Vegas Amped is blacklisted, we advise you play at another casino. 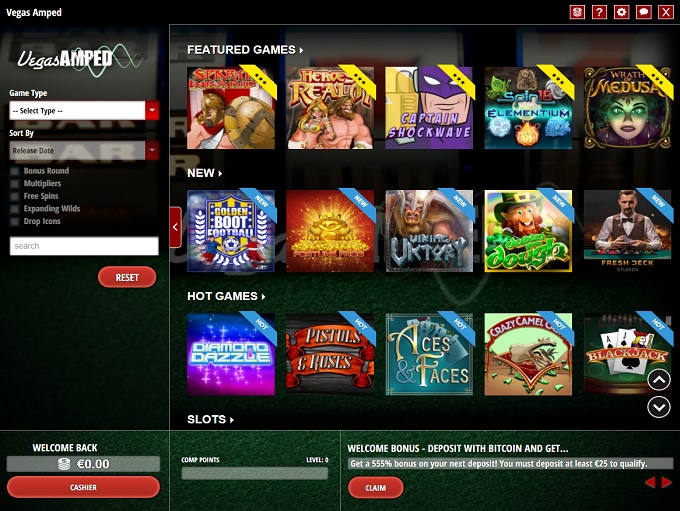 Vegas Amped Casino is a flashier looking online casino site, and one which can be reportedly be played in downloadable, instant play and mobile casino platforms. Believe it or not, there are more than a few issues with this casino which players may wish to take note of, though. Firstly, the online casino does not appear to be licensed – which is a big no-no in the online casino world. Secondly, they have a terrible track record with payments.

The online casino is known to have suffered complaints from angry players which have reported delays of up to 2 weeks when they try to withdraw their winnings. Many respectable casino review sites have also made similar claims, and for that reason, we aren’t going to encourage our readers to dive right in when betting at this site. The casino accepts deposits made using credit cards, UseMyWallet, Click and Buy, ecoPayz, Neteller, Click 2 Pay and Skrill. Customer support is only available via e-mail, and it can take over 10 hours to get a reply, which just isn’t good enough by any stretch of the imagination.

Vegas Amped Casino features Rival Gaming software over at their casino domain. These games are decent enough, and there are many of them for you to play. The instant play version of the casino carries 8 table games, over 100 slots, 7 video poker titles, and roughly 4 progressive jackpot games. This should be enough to suffice most players needs at the casino.

Some of the bigger games include Star Jewels, Diamond Dazzle, Pistols and Roses, Tycoon Towers, Swinging Sweethearts, Panda Party, World of Oz, Loco 7s, Arabian Tales, Golden Gorilla, Whale o’ Winnings and Blazin’ Buffalo. Again, we wouldn’t recommend playing at this casino, due largely in part to the lack of effort by the casino in paying out players on time, and the fact that they appear to be unlicensed.

Currenty there are no reviews for Vegas Amped. Be the first one who will review it.