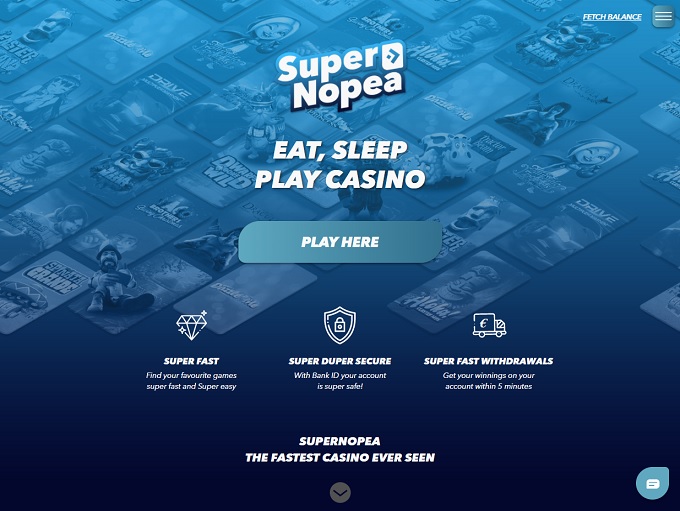 As you may have guessed, SuperNopea is a Finnish online casino site. It can be played in either English or Finnish, though, even if the Maltese licensed and Bethard Group owned site does primarily cater to players in Finland. The domain offers casino gaming without the need for players to sign up. This means that while they lack many promotions and bonuses, SuperNopea can deliver winnings to players via withdrawals in record times.

Of course, to use SuperNopea, players are going to have to use banking options which are suitable in Finland. Trustly is usually the way to go in that regard. Players will also have to have a BankID or some other form of online legitimisation to prove that they are who they claim to be and have the right to play. You can always seek support if you have questions. SuperNopea’s support team can be reached via live chat or e-mail between 9am and 1am UTC every day of the week.

Because SuperNopea doesn’t require players to register for accounts, there are no bonuses or promotions up for grabs at this casino. This has its perks. For one thing, players are not going to have to fulfil wagering requirements before they can withdraw their winnings.

On a side note, there won’t be any delays with picking up your winnings, either. The casino instantly processes withdrawals, which means that you should have hold of anything you have won within a matter of hours. This is becoming all the rage at Scandinavian casinos and is part and parcel of the service that SuperNopea provides.

SuperNopea Casino may be a Finnish casino, but its games come from internationally recognised providers. Software can be found from developers which include Quickspin, Net Entertainment, Microgaming, Thunderkick, Yggdrasil Gaming, Evolution Gaming (live dealer games), NYX Interactive, iSoftBet and Endorphina. Those games primarily consist of online slot machines. However, a handful of table games and instant win titles can also be found and played. SuperNopea adds new games with increasing regularity, so there is always something new to play.

The casino is not short of top titles. Major progressive jackpot slots such as the Norse mythology-themed Hall of Gods have an instant appeal. Other top titles include Dead or Alive II, Poltava, Safari Gold: MegaWays, Vikings Go to Hell, Reel Rush 2, Imperial Riches, and The Age of Asgard slot games.

Currenty there are no reviews for Supernopea. Be the first one who will review it.

Supernopea Casino supports banking methods for deposits and withdrawals for