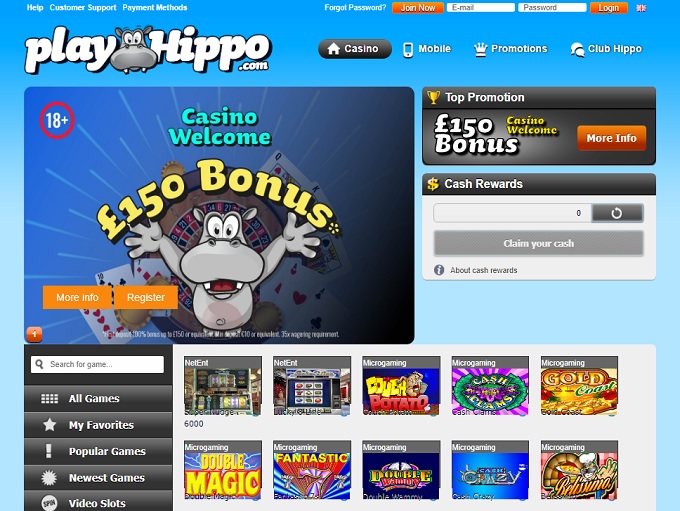 This site, which is licensed in Malta, welcomes members from nearly every country in the world. The only exceptions are France and the United States. The casino accepts close to a dozen currencies and supports eight languages.

This site has a rather unusual name for a casino, though their cartoon Hippo character is in keeping with much of the fun animation you will find when you play their slots. But Play Hippo has more than just great games and great graphics. They also have some outstanding promotional offers, including their Welcome bonus. You can get a 100% cash match on your first deposit that can be worth as much as 150.00.

When you’re ready to put money into your account, Play Hippo offers an astounding 40 banking options. They include credit and debit cards, eWallets and a bank transfer. The casino also lists more than two dozen “Instant Banking” options that let you send a cash voucher to the site for instant credit. Among the companies offering Instant Banking options are Giropay, Neosurf, Trustly and Poli.

Play Hippo has both a Loyalty program and a VIP Club. All of your bets in the casino will earn you Loyalty points. Every 100 points can be converted into €1 and you can begin to convert your points into cash as soon as you reach the 200 point plateau.

The VIP program at this site is known as Club Hippo, where all members can find a full list of promotional opportunities. Each month, Club Hippo has a new list of offers for their members, including cash bonuses, cash prizes, luxurious gifts and plenty of free spins.

Play Hippo utilizes the software of several providers, including BetSoft, a company that has given the casino a number of their famous 3D slots. Among these popular and visually impressive games are Sugar Pop, Boomanji and Whospunit.

Play Hippo also has the games of other leading developers NetEnt and Microgaming. You’ll find a full selection of card, dice and table games in the casino as well as video poker, arcade games and scratch cards.

Play Hippo also has several progressive jackpot games, all offering the possibility of huge potential payoffs. Most of the jackpots are slots, including such popular games as The Glam Life and Tycoons. But Play Hippo also has a jackpot video poker game called All American 1-Hand.

Currenty there are no reviews for Playhippo. Be the first one who will review it.

Playhippo Casino supports banking methods for deposits and withdrawals for