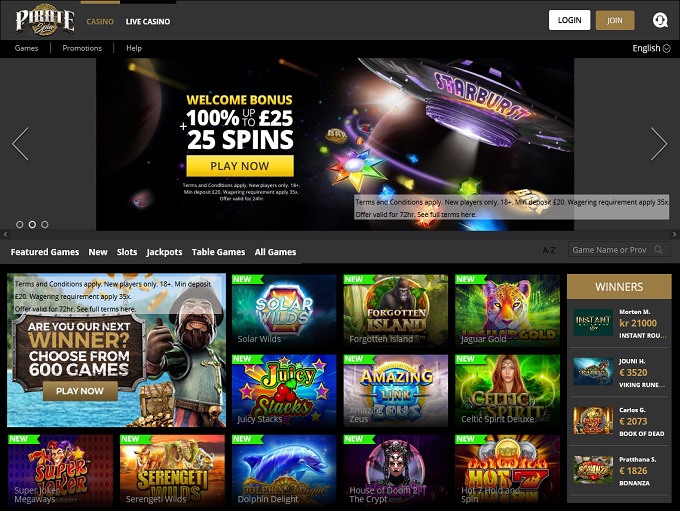 Stepping aboard this multilingual casino and letting them sail you to bountiful bonuses couldn’t be easier. Launched in 2018, and licensed out of Malta, the United Kingdom, and Alderney, Pirate Spin can offer gaming to players across the globe. Pirate Spin is a themed casino and one which is iTech Labs certified and operating Aspire Global International, Ltd. They offer both mobile and instant play games at their casino.

Regarding banking options, there are plenty for you to choose from. Deposits can be made using VISA, bank transfers, Sofort, Trustly, Skrill, Neteller, Giropay, Euteller, Zimpler, Paysafecard, Instadebit, and Entropay. Most of those deposit options can also be used to withdraw funds from the casino, although cashout times are a little slower than most players would like. Plenty of currencies are accepted at Pirate Spin, and customer support is available via FAQ, telephone, live chat and e-mail.

After registering as a new player at Pirate Spin Casino, players will be invited to claim a generous welcome bonus. The offer is valid on the first deposit a new player makes and comes as a double-your-money 100% cash match, valid up to £200. Players can also pocket 20, 40, and another 40 free spins on the first, second and third day that they are a member of Pirate Spin, respectively.

On top of the welcome bonus, players at Pirate Spin can join a rewards program which dishes out points based on the wagers that players make, and over time those points can be used to claim cash prizes and bonuses from the site. Live blackjack bonuses and regular monthly raffles and prize draws round off the promo and bonus deals at Pirate Spin Casino.

Pirate Spin is divided up into three main sections, namely the casino, live casino and scratch card wings. However, most of the main titles can be found in the casino section of the site. Games are broken down into topics which include featured, new, video slots, classic, casino games, scratch cards, all games, and recently played game genres.

Currenty there are no reviews for Piratespin Casino. Be the first one who will review it.