Mummys Gold has a warning, we advise you play at another casino. 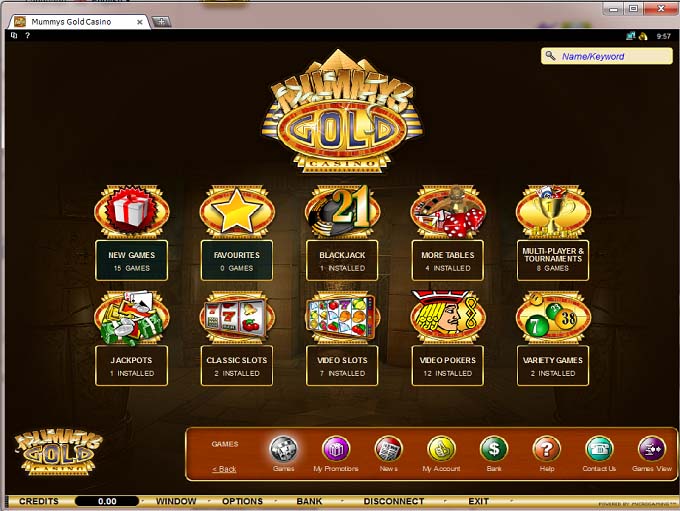 The Microgaming powered Mummy’s Gold Casino used to be one of the leading online casino sites on the net. How the mighty have fallen. Over the last few years, Mummy’s Gold Casino has kind of fallen from grace, to become a so-so Microgaming powered domain, and one which never really goes out of its way to introduce the latest games. The casino has remained unchanged for years, and that has left it a bit stale, in comparison to newer casino sites out there.

Mummy’s Gold Casino is an eCOGRA certified casino, and is licensed out of Malta, so there are no security issues surrounding this casino. However, its selection of games, bonuses, and support options simply aren’t what they once were. It doesn’t even offer mobile gaming, which is a sign of how old fashioned the casino is.

Mummy’s Gold Casino launched in 2002, and remains virtually the same as it was back then. It offers a wealth of customer support options and banking methods, and can be played in numerous languages and with a plentiful array of currencies, but that won’t tick every modern casino gamer’s boxes.

Keep an eye on the promotions and bonuses over at Mummy’s Gold Casino. They are dated and lacking in number. Players can claim a 100% double-your-money bonus on their very first deposit as a new player, and this is worth up to $500 in all. Beyond that, though, there are precious few promos and bonuses to speak of, which is yet another sign that Mummy’s Gold Casino is behind the times.

The mighty Microgaming provide the power over at Mummy’s Gold Casino. One would imagine that with the leading casino software provider offering up the games at the casino, that Mummy’s Gold would be brimming over with quality games. It isn’t, though. For some reason or another, Microgaming’s latest slot machines don’t seem to appear at the casino, which is frustrating and worrying to say the least.

Mummy’s Gold Casino’s newest games are at least two years old, and none of the most recent games (the most exciting ones) can be found there. Naturally, these games aren’t mobile friendly, either.

Mummy’s Gold Casino’s table games are still just as relevant as they always were, but their lack of new slots really makes them suffer. Personally, we have little to no interest in playing at this casino, because although some of the older slots are still very agreeable, the range of games this casino carries in comparison to other Microgaming casino sites is woeful.

Currenty there are no reviews for Mummys Gold. Be the first one who will review it.