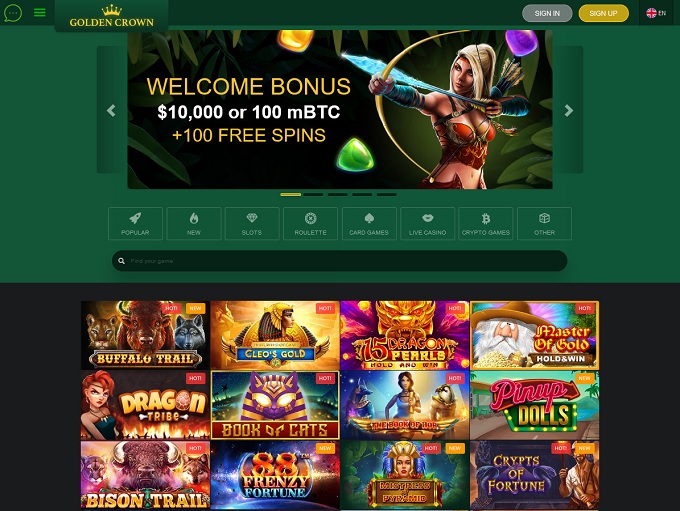 Golden Crown Casino is an internet betting portal which features a classic look and feel. The site aims to cater to players across the world and features a Curacao issued license which enables it to do just that. Golden Crown is a Secure Socket Layer (SSL) encrypted casino site and one which has games that have been proven fair.

The online casino is also one of the leading cryptocurrency casinos you might choose to play at. Golden Crown features payment methods which include Bitcoin, Bitcoin Cash, Ethereum, Coins Paid, Dogecoin, Litecoin, Tether, and FIAT currency accepting banking options. Customer support is not available via live chat, but an FAQ guide and an online e-form should provide you with enough assistance whatever question or query you might have when playing there.

By becoming a new player at Golden Crown Casino, players are going to be entitled to claim a 100% match deposit bonus. Issued on a new player’s first deposit, the bonus is worth up to $1,000 or 100mBTC. The Golden Crown offer also includes 100 free spins on the Aztec Magic Deluxe slot. After claiming that deal, you can look at a handful of the other promos that the site has to offer.

These include a regular reload bonus from Fridays to Saturdays. With this offer, players can snap up 50% matches up to a grand or 100mBTC when they deposit on the weekend. Golden Crown Casino also runs a VIP program. This loyalty club can see points accumulated and new status attained, both of which dole out top prizes and real money.

The array of casino software developers which are active at Golden Crown Casino are a baffling mixture. Play Reels, IGTech, Authentic Gaming, Belatra Games, and bGaming make up the more recognisable providers. This array of smaller-scale and less-known developers gives Golden Crown Casino one of the more interesting and original gaming libraries of any site.

Casino games at Golden Crown are divided up into popular, new, slot, roulette, card game and “other” genres. Over 150 top games can be played at the casino. Some of the more popular ones with members of the internet betting site include Pyramid Power, Book of Pharaohs, An Escape from Alcatraz, Japanese Blossom, Wolves Fortune, Aztec Magic Deluxe, Princess of Swamp, Long Dragon, Dragon’s Den, Majestic Ocean, Perfect Pearls and the Lucky Drink game.