20.0%
Cashback is calculated from total real money losses made in Evolution Live Casino games during Tuesdays (00:01-23:59 UTC). Cashback is paid at around 6:00 UTC the following morning on Wednesdays respectively. Cashback is paid in real money with no wagering requirements attached.
non cashable
CLAIM 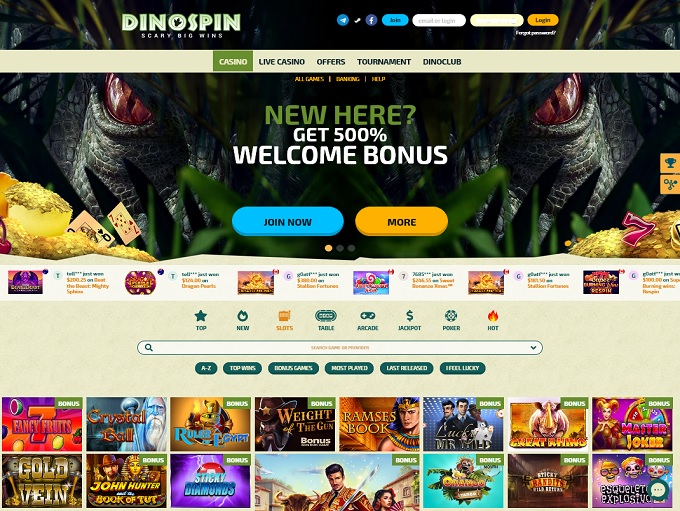 Dinospin is an online casino site launched in 2020. The site is owned by Highweb Services and operates with a license issued by the Curacao Gaming Commission. The site hosts a vast gaming catalogue that features games cutting across different categories such as slots, table games, and jackpot features. Games on the site is powered by a number of casino software developers, some of which include reputable names in the industry. Games hosted on the site can be played on a wide range of mobile, tablet, and desktop devices. Dinospin also operates a multilingual site that features English, French, German, Polish, Spanish, Hungarian, Czech, Finnish, Portuguese, and Romanian.

The site features a range of options for making payments and processing withdrawals on the platform. Deposit methods supported on the site include Visa, Mastercard, Neteller, Skrill, Neosurf, Zimpler, AstroPay, Paysafecard, Flexepin, and ecoPayz. Deposits can also be made in crypto via Bitcoin. Currencies supported on the platform include the US dollar, Australian dollar, Euro, New Zealand dollar, Canadian dollar, Swedish Krona, Norwegian Krone, and Bitcoin. The minimum accepted deposit on the site is €10.

There’s also a number of options for processing withdrawals. These include e-wallet options such as Neteller and Skrill as well as card options such as Visa and Mastercard. Withdrawals can also be processed via bank wire. The minimum withdrawal amount on the site is set at €25 with a monthly cashout limit set at €10,000. Depending on the payment used, it can take anywhere from three to ten days to process withdrawals.

Dinospin has a range of freebies and bonuses for both new and existing players. New players on the site are entitled to a 100% matching bonus up to €400 accompanied with 100 free spins.

The site maintains a customer support system to enhance the gaming experience of players. There’s a support team in place to attend to inquiries, complaints, and help resolve issues. The support team can be reached via email and live chat.

Dinospin Casino hosts a robust gaming catalogue that will appeal to a large spectrum of gamblers. Games featured on the site cut across a number of gaming preferences such as slots, table games, jackpot games, and live dealer games.

Games on the site are powered by a line of casino software developers which include Microgaming, Betsoft, Evolution Gaming, Pragmatic Play, NetEnt, Next Gen Gaming, and Big Time Gaming amongst others.

Currenty there are no reviews for Dinospin. Be the first one who will review it.

Dinospin Casino supports banking methods for deposits and withdrawals for