Casinomga has a warning, we advise you play at another casino. 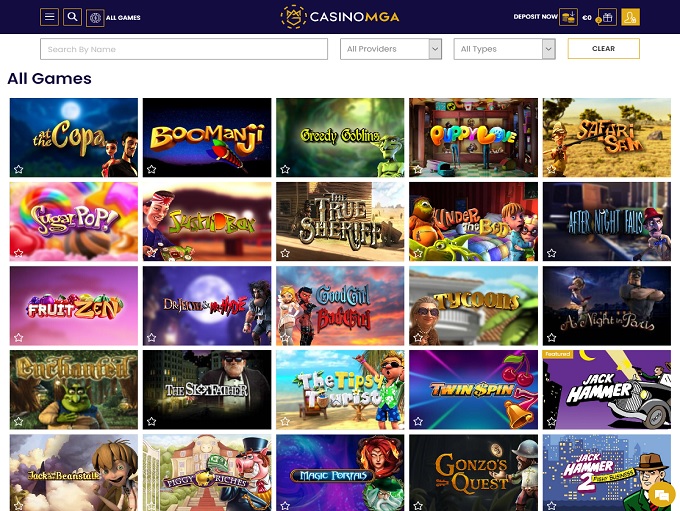 CasinoMGA sounds like it is a Maltese licensed site. After all, MGA stands for the Maltese Gaming Authority. However, there doesn’t appear to be any links between this casino – which doesn’t showcase any licensing information at all – and the Maltese gambling license commission. CasinoMGA does not accept players from the United Kingdom, or several other countries, although they are known to accept Australian players.

Given that the casino is seemingly unlicensed, it is somewhat difficult to recommend it to players. They do offer customer support, but the live chat and e-form support options are aimed at players in the UK (which CasinoMGA doesn’t accept) which complicates the issue even further. They take deposits made using Jeton, UPayCard, Neosurf, VISA and MasterCard.

The sizeable welcome bonus that this casino offers raises eyebrows. It promises a €5,000 bonus spread over the first seven deposits a new player makes. The very first deposit is met with a 400% bonus on deposits over €100 and is worth up to €2,000. Alternatively, there is a 200% bonus on smaller deposits ranging from €20 up to €99. The next seven deposits are worth 100% bonuses which are valid up to €500 apiece.

No other promotions and bonuses seem to be available at CasinoMGA, which will surely disappoint any long-term players that might consider giving the online casino a try. Not only are there no further promos, there doesn’t appear to be a loyalty bonus program or VIP club in session at CasinoMGA.

On their homepage, CasinoMGA claims to be able to offer games from BetSoft Gaming, Novomatic, Playtech, Aristocrat, Amatic Industries, Net Entertainment, IGT, Igrosoft, Merkur Gaming, EGT, Spinomenal and Tom Horn Gaming. However, upon closer examination of the software providers offering games at the site, only titles from BetSoft Gaming, Spinomenal and Tom Horn could be found. This is very worrying, as it seems that the casino is deliberately misleading any players who might consider joining them.

Games which can be played include video, classic and 3D slots, and there doesn’t appear to be any non-slot games offered in their collection. There are better casinos out there which far more diverse collections than this. Of the slot games that they do carry at CasinoMGA, the most popular ones seem to be Boomanji, Fruit Zen, At the Copa, It Came from Venus, Sugar Pop, After Night Falls, the Slotfather, Reels of Wealth, Greedy Goblins, Puppy Love, Wild Heist and Tycoons.

Currenty there are no reviews for Casinomga. Be the first one who will review it.

Casinomga Casino supports banking methods for deposits and withdrawals for