New Customer Offer. T&C’s Apply. 18+.  50 Free Spins on 'Book of Dead' by Play'n GO. How to claim the bonus: Players need to sign up through our LINK and the free spins will be immediately available.Max Cashout: €100. Once credited when does the bonus expire: In 10 days. Allowed game: Book of Dead. Allowed max bet per spin: €5. Need to register credit card to claim no deposit: No. Min deposit needed in order to cashout winnings: Yes - €10. Bonus can be claimed in conjunction with sister casinos no deposit? No. Is the ND available on download &/or instant play version? No. Is No deposit available on mobile? Yes. Promo valid until: Until further notice. Restricted countries from the bonus: United Kingdom, India, Peru, Chile and Brazil.

cashable and no deposit 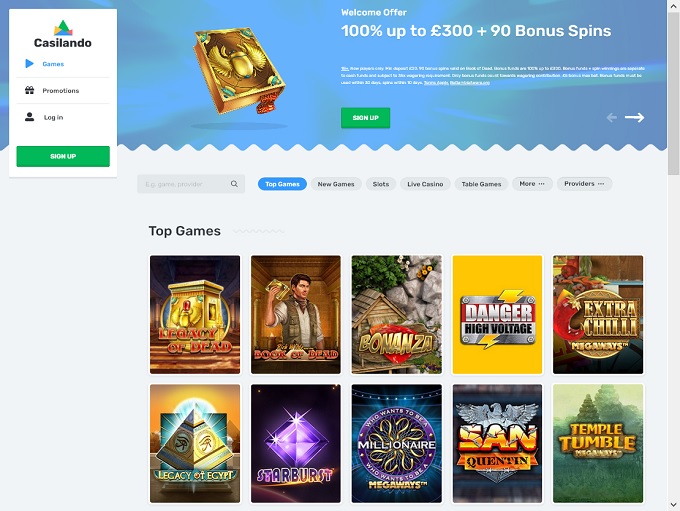 Casilando Casino is perhaps more famous amongst UK casino players than anywhere else, although players can choose to play at this casino in German, Finnish, Norwegian and Swedish if they wish. The casino is mobile-friendly, but can also be played on your laptops as an instant play site. Casilando launched just this year, and is owned by the White Hat Gaming group, and operated by Imperium Network Solutions Limited. Casilando is licensed out of Curacao and the United Kingdom.

Players have a decent number of deposit options at their disposal at Casilando, and they can use the euro, Norwegian krone, Swedish krona, or UK pound sterling currency options to deposit with. Banking options include Dotpay, Giropay, MasterCard, Neteller, OchaPay, Paysafecard, Skrill, Sofort, Trustly, VISA and wire transfers. Players at Casilando will find that customer support is available via live chat or e-mail.

Newbies who sign up at Casilando will be able to claim 10 free spins immediately upon completing the registration process. After bagging that bonus, they can also make their very first deposit to claim another offer. This is valid up to £300 courtesy of a 100% bonus, with a further 90 free spins up for grabs.

Other bonuses at this casino include the chance to bag monthly prize giveaways including tickets to major events and holidays, whilst the Casilando loyalty points program can see players pocket points per wagers, and potentially convert those points into casino cash and other goodies. Lastly, any player who refers a friend to Casilando successfully can claim a special £10 bonus for every friend the convince to join the site.

Currenty there are no reviews for Casilando. Be the first one who will review it.

Casilando Casino supports banking methods for deposits and withdrawals for