Boombet Casino has a warning, we advise you play at another casino. 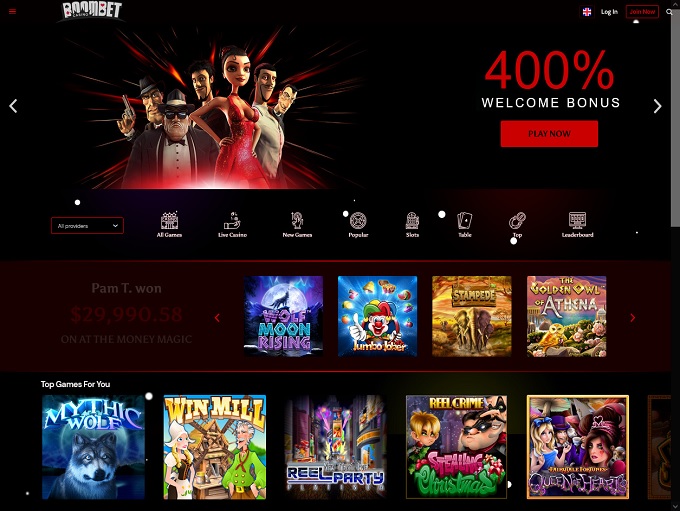 Unfortunately, BoomBet Casino has picked up a bit of a negative reputation since it first launched. It is not without merit, either. This online casino is licensed out of Curacao, and like a few other domains licensed out of this region, there appear to be a few hiccups with paying players their due winnings. BoomBet Casino may feature some top software, and offer both instant play and mobile gaming to its fans, but shaking off that feeling of unprofessionalism is going to be tough for them.

The online casino can offer players the chance to deposit using VISA, MasterCard, Neteller, Sofort, Paysafecard, Giropay, iDeal and Skrill. Unfortunately, given the rather poor status of the casino when it comes to withdrawals, we wouldn’t advocate using them. At the same time, their customer support is sketchy at best. Even though they offer live chat, the customer support team doesn’t seem to have many answers to questions you may have.

BoomBet Casino offers players a 100% bonus when they make their first deposit at the casino. Aside from that, they have a 50% cashback offer on subsequent deposits. The wagering requirements on these bonuses are modest, but they aren’t anywhere near as flexible as though which you may find at other casino sites, including some which are licensed out of Curacao.

Despite its shady reputation, BoomBet Casino actually has some rather decent games to offer players. They can dish out games from Rival Gaming, Vivo Gaming, BetSoft, Sandstorm, Pariplay, and even Microgaming. If only their customer service was as varied and popular as the casino software developers which power their domain, BoomBet Casino could be a far better online casino than it currently is.

Players will find a host of games over at this casino, including major titles as we’ve said. As well as new games and popular titles, the casino also offers table games, although not as many as you might like to think. Slots seem to be this casinos forte, and some of the more popular games you can find include Fruit Zen, Good Girl Bad Girl, Ariana, Sharknado, Boomanji, Kawaii Kitty, Under the Bed, Burning Desire, The Big Chef, and Reel Spinner.

Currenty there are no reviews for Boombet Casino. Be the first one who will review it.